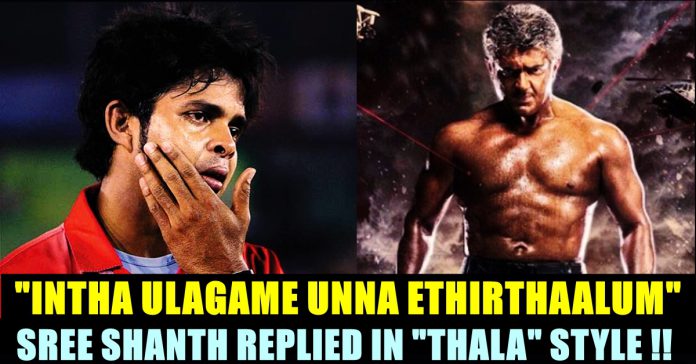 None of the eight IPL teams shortlisted Kerala based fast bowler S Sreeshanth in their team. The cricketer who recently made his comeback to cricket uploaded a video in his official twitter handle in “Thala” style and confirmed that he will be back soon. The video is garnering huge reception and is going viral among the fans of Indian cricket and among the fans of actor Ajith kumar. Sreesanth was banned by the Board of Control for Cricket in India (BCCI) in 2013 for spot-fixing. His 7-year suspension came to end on 13th of September 2020.

A total number of 292 cricketers are set to go under the hammer at the IPL mini auction which is scheduled to take place on February 18 in Chennai. The eight franchises of the Indian Premier League have submitted the shortlist of players after 1114 cricketers registered their respective names for the upcoming auction in Chennai.

Sachin Tendulkar’s son Arjun Tendulkar has been shortlisted with a base price of INR 20 lakh. Australian batsman Marnus Labuschagne has also made himself available for the IPL 2021. However, Indian pacer Sreeshanth who was expected to play the tournament this year, was not shortlisted by any of the teams. S Sreesanth, who has previously represented teams like Kings XI Punjab and Rajasthan Royals, was a regular part of the Indian Premier League in the first six seasons.

Reacting to this decision of the IPL teams, Sreeshanth came up with a video reply in his official twitter account. He who was seen travelling in a car, plays the famous dialogue of actor Ajith from his film “Vivegam”. “No matter what the world thinks about you, until you accept, no one can defeat you” Ajith would say in “Vivegam” and the pacer used it for his current situation.

“No one can defeat me. I will come back, definitely. Shree is gonna be back. Love you all. Love you for support. Trust me. I am not gonna give give up. Never, ever.” Shreesanth says in Tamil. “love u all.. it’s just the beginning..#grateful #blessed #bcci #family #kca #cricket” caption of his post read.

The tweet garnered huge reception from the users of twitter in no time. Many including Ajith fans celebrating this tweet of the cricketer and wishing him the best to make a comeback in the IPL tournament. Check out some of their reactions below :

Never ever give up🤙🔥🔥 pic.twitter.com/qHpBZnY7sZ

Recently, Sreeshanth got selected for Kerala cricket team and resumed his Career in national cricket. In 2018, he participated in the popular reality show, Bigg Boss and became the runner up as well.

Chennai Superkings lost by 13 runs against Royal Challengers Bangalore in the match that took place on Wednesday. A video that shows Virat Kohli...