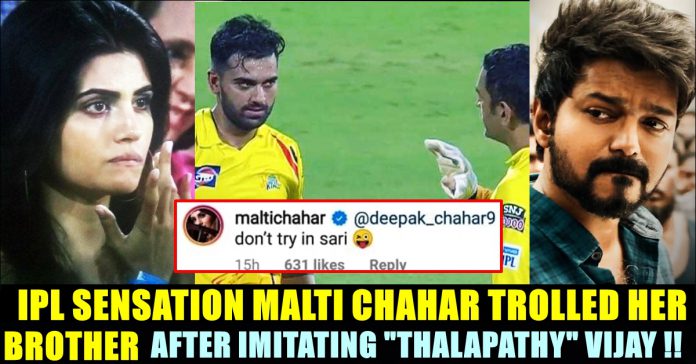 Malti Chahar, popular model and sister of Chennai Super Kings cricketer Deepaki Chahar recreated the viral “Vaathi coming” song of Thalapathy Vijay and challenged her brother to do it. The Uttar Pradesh born’s recreation video of a Tamil song won the hearts of Tamil fans and the hilarious reply she made to her brother when he said that he too will try garnering wide attention from the fans of CSK.

Even after the film completed its theatrical run, the craze created by the “Vaathi coming” of Vijay starring “Master” is still unwinding. Before getting released in theatres, the Aniruth’s fast number released on youtube and left the fans humming. After the visuals got released, the song attracted millions and millions of fans along with celebrities from other notable industries.

After winning the Syed Mushtaq Ali trophy, Tamil nadu team led by Dinesh Karthick shook their legs for “Vaathi coming” and the video went immensely viral across social media platforms. After that, Indian all rounder Ravichandran Ashwin, did a “Vaathi coming” while fielding in the Chepauk test in which he received “Man of the match” award. Ashwin also made his fellow India cricketers to perform dance steps for the song.

Now, Malti Chahar who rose to fame among CSK fans through her impulsive expression during a match between Chennai Super Kings and Mumbai Indians, recreated the famous steps and uploaded it in her official Instagram handle before challenging her brother to do the same.

“Tried in sari 🙈 I did it Deepak Chahar. Now it’s your turn😀 vaathicoming #vaathicoming🔥 sari #saree” she wrote as her caption to the post.

On seeing the video, Deepak, one of the prominent pacers of Chennai Super Kings team said that he will try it. “don’t try in sari 😜” replied Malti and left the followers of her in splits.

Many fans of team CSK and actor Vijay got impressed with the “Vaathi coming” of Malti’s version and asked her to perform more reels based on Tamil.

Malti Chahar became familiar after she acted pretty animated after almost delivery in the final overs of a match between Chennai Super Kings and Mumbai Indians. She is one of an ardent supporters of the Dhoni led team. Her reactions have left the Indian social media people to go berserk as a lot of memes have also been created.

She is currently enjoying 4 lakh plus followers in Instagram and is keeping them engaged with her reels and posts. Check out some of her recent posts below :

The fact that one of our best directors – Mani Ratnam – has returned to his ‘Nayakan days’ with his new film Chekka Chivantha Vaanam gives us...

This Internet User Abused Oviyaa For No Reason !! Here’s How She Gave Him Back !!

Oviya, is an Indian model and film actress who has worked predominantly in the Tamil and Malayalam film industries. She made her breakthrough as...