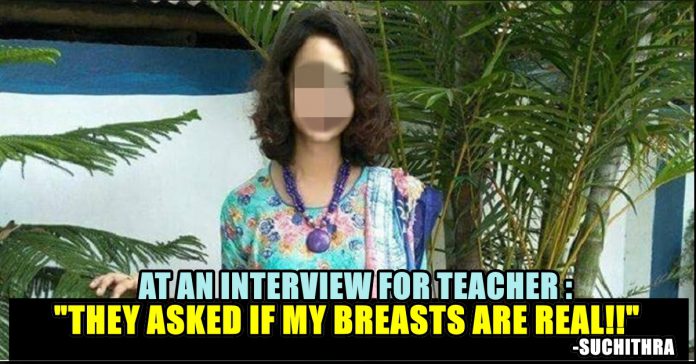 Interviewers Asked If Her Breasts Were Real For A Job Post Of Teacher !! : SHOCKING !!

Countless incidents have proven time and again that India is a long way off from shunning gender discrimination. This hard truth is further confirmed upon listening to the story of 30-year-old Suchitra Dey, a transgender teacher in Kolkata.

Dey, who underwent a sex-reassignment surgery (SRS) in 2017, changed her name from Hiranmay Dey. Armed with a double MA (in Geography and English) and B.Ed degrees, she interviewed for a teaching position at schools. But, according to her, as the Indian Express reported, instead of being asked about her qualifications, she was asked whether her “breasts were real” and whether she could give birth.

“When they looked at me, all they could see was a man who had transformed into a woman. Nothing else mattered because if one belongs to the third gender in this country, ridicule is a way of life,” Dey told the Indian Express. “One of the interviewers at a well-known Kolkata school asked me to wear male outfits because all my mark sheets and certificates say that I am a man. In each of these interviews, I faced the worst kind of humiliation. The male principal of one of these schools asked me whether I can bear a child. He also asked me if my breasts are real. Would these questions be asked if I wasn’t a transgender woman?”

In her complaint to the West Bengal Human Rights Commission (WBHRC), which she submitted on June 11, she wrote: “I couldn’t handle the humiliation anymore. The things I have been asked by authorities at “reputed” schools of Kolkata shows the kind of mindset people still hold about our community. If someone like me, who is educated and experienced, has to face this then imagine the plight of those who don’t have the opportunity to go to school, or the ones who have been ostracised.” Before going in for the surgery, Dey taught at a school in the Thakurpukur area in the city where she said everyone was “very cooperative”. Still a teacher there, she said the management did not give her any issues when she rejoined the school and began to “lead her life as a woman”.

India, though the Supreme Court recognised transgenders as a ‘third gender’ in 2014, discrimination is still rampant. Many are shunned by the family, are excluded from being a part of society and are refused basic civil liberties. Finding a house to rent can become an impossible nightmare and violence against transgenders is still widely prevalent.

Previous article500+ Students Got Free Higher Education Because Of MAATRAM FOUNDATION !! : Lets Make More Deserving Students To Get Valuable Education !!
Next articleWhen His Own Relatives Failed , 4 Muslim Men Helped This Hindu Man To Perform Last Rites For His Sister !!

The reality show Bigg Boss Tamil is back with the third season, and reportedly, Kamal Haasan will be hosting it yet again. According to...