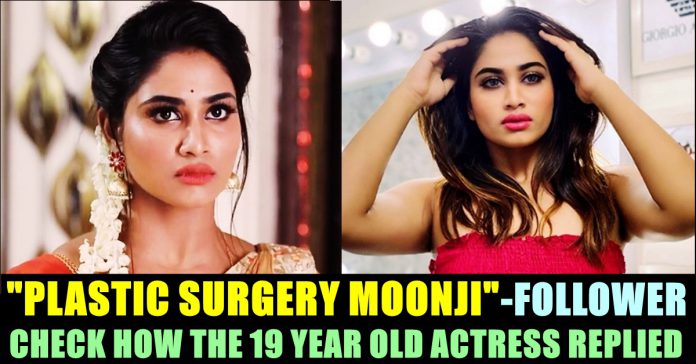 Shivani Narayanan, the young Internet sensation who is making youngsters go gaga through her ultra glamorous photoshoots, has conducted a Q & A session with her Instagram followers. She who is very much believed to enter the Bigg Boss reality game show, is rumoured to be spending his quarantine days in a hotel room allotted by the Bigg Boss management. Now, the 19 year old actress has gave back to a couple of trolls through her Instagram account only to grab the headlines.

She who enjoys 20 lakh followers in Instagram, has posted 320 posts so far. Check out some of her recent post below :

Another follower accused the actress of being artificial. He tried to mock her by writing “Plastic Surgery Moonji”

Shivani has a separate set of followers for the posts she has been sharing in her official Instagram account. Known for appearing in serials such as Pagal Nilavu, Rettai Roja etc, Shivani constantly receiving 2 lakhs likes for her posts and thousands of comments. Lately, a rumour surfaced saying Shivani is going to make her silver screen debut with Bigg Boss title winner Mugen. However, the Malaysia based model refuted the news through his instagram story.

The latest buzz is, that the actress is going to participate in the Kamal Haasan hosting show. Fans are eagerly waiting for October 4 to see whether the news is true. Comment your views on the replies made by the upcoming actress !!