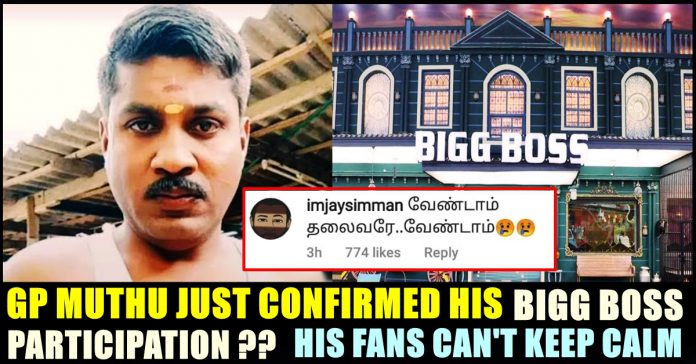 Social media users can’t keep calm after a post from GP Muthu’s Instagram account surfaced suggesting that he is going to enter the Bigg Boss house as a participant for the 5th season of the Kamal Haasan hosting show. Logo of the upcoming season released recently with the “Vikram” actor himself presenting it to the fans through a 30 seconds video. Speculations regarding the participants are doing rounds and the recent update about G.P Muthu’s participation has created waves.

G.P Muthu lives in a village named Udangudi which is located in Thoothukudi district. Repairing old windows, doors which were made of wood is his occupation. He is also running a lumber shop in his village, says reports. He who has four children, started uploading videos in Tik Tok during his work time to engage himself. With Tik Tok being a widely used mobile application at that time, videos of G.P Muthu went viral among the users of it.

He imitated Tamil film songs and his videos started receiving views in millions. G.P Muthu who started doing videos for entertainment, started spending his full time in Tik Tok. He became a subject to severe online trolls and didn’t stop doing videos in Tik Tok. After the TIK Tok app got banned, GP Muthu initiated a youtube channel and is actively doing videos for it.

Currently, the youtube channel of GP Muthu in nearing 1 million subscribers with half million views for every video. His humorous reactions and rural slang has a separate fan base. Now, a post that got surfaced in his official Instagram handle has created shock waves in social media platforms. The post shows the former posing with a banner of “BIGG BOSS” wordings. Check out the post below :

The post garnered huge receptions with thousands of his fans reacting to it in various ways. Many said that his career got ended and suggested him not to enter the Bigg Boss house as the show is known for creating quarrels and verbal spats between the contestants. Check out some of the reactions that surfaced in social media platforms below :

Season 5 of the most awaited reality game show Bigg Boss Tamil is all set to be inaugurated from the end of September month or the beginning of October. After initial confusions, it has been confirmed that Kamal Haasan is going to host the show. However, questions about the 15 plus celebrity contestants who are going to take part in the show is being unanswered still and speculations about the same is being made across the Internet. Many media portals has been coming up with a list of celebrities who could participate in the cash rich show. Comment your views on this Insta post of G.P Muthu !!

Previous article“Who Created Nature?” Director’s Reply To Sumanth Raman Goes Viral !!
Next articlePrashanth Reacts To The Trolls Made On His Recent Tweet!!

Kasthuri Continues To Slam Vijay TV Regarding Her Payment Issue !!

After seeing the statement released by Vijay TV. actress Kasthuri who participated in their Bigg Boss show, continued to slam the TV channel alleging...

MASTER Single Released !! Fans Has To Say Something !!

The most awaited single of Master's Vaathi coming released on Youtube only to be celebrated by the fans. The song which contains lyrics in...