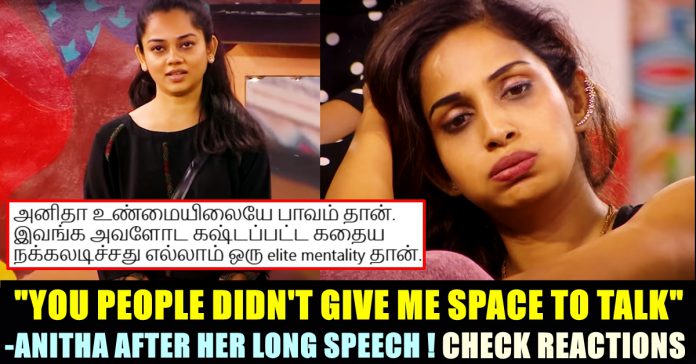 After seeing the Thursday episode of Bigg Boss show, Internet came up with various reactions regarding the speech made by Anitha Sampath, one of a contestant. When Bigg Boss asked contestants to share about their loved ones whom they are missing now, Anitha Sampath said that she is missing her husband Prabhagan so much. After that, she also said that she is missing her Mother a lot. On seeing her speech lasting for a long time, housemates felt uncomfortable and at one point, Samyuktha asked her to finish her speech. this incident has instigated reactions in social media with many trolling Anitha and others supporting her.

Anitha who seems to be an emotional person, a couple of days ago broke down in tears while talking about her husband to Bigg Boss. Now, when Bigg Boss asked her to talk about how much she is missing her loved ones, Anitha made a long speech explaining how she and her husband stood for each other. This caused an unrestness among the other contestants.

When Aajeedh asked Ramya what topic she was supposed to talk about, Bala requested Bigg Boss to remind Anitha that she is talking about something else. Shivani, Suresh Chakravarthy, Ramya pandiyan also felt visibly uncomfortable but Anitha continued talking. At one point, Samyuktha, one of the co-contestant of Anitha interrupted her and asked her to finish her speech soon.

Anitha, after that, talked about her Mother a bit and left the stage. As soon as the episode streamed, users of social media platforms came up with various kind of reactions. When a set of people felt that Samyuktha was rude, others said that Anitha is either talking or crying.

However, after finishing her speech, while talking to Samyuktha, ANitha said that it is not about just 16 members. “They could have edited and showed what should be conveyed to my mother. Just because you people are getting bored, I stopped abruptly. All of you got space to talk about your loved ones but I didn’t get it is what I feel” said Anitha to Samyuktha.

“This to lengthier than the China wall” movie reviewer Prashanth trolled Anitha whereas another twitter user said that it shows the elite mentality of Samyuktha. Check out some of the comments below :

When will this #Anithasampath realize she is not the only happily married woman in this universe ?#BiggBossTamil4

After watching #RamyaPandian & Co laughing at #Anithasampath speech, It reminds me of my school days being backbencher having fun during a boring speech.
I'm not gonna say anyone is wrong in this. Although Anitha made my ear bleed but I had a good laugh too.#BiggBossTamil4

Those supporting #Anithasampath , be honest wasnt she telling unnecessary long story ? . Too much space given . And #Samyuktha wasnt rude . #BiggBossTamil4

Biggboss is your wrong decision #Anithasampath
This is not your stage.#biggbosstamil #Biggbosstamil4

Previous articleWhen DK Made Umpire To Talk In His Mother Tongue !!
Next articleThis Tweet Of Mumbai Indians About SKY & Kohli Irked Fans !!

Varmaa, the Tamil remake of Arjun Reddy which marks the debut of actor Vikram’s son Dhruv, has been rechristened as Adhithya Varma, its makers...

Several celebrities, fans and even politicians are reacting to the judgement of Madras High Court on the case regarding actor Vijay's petition which sought...