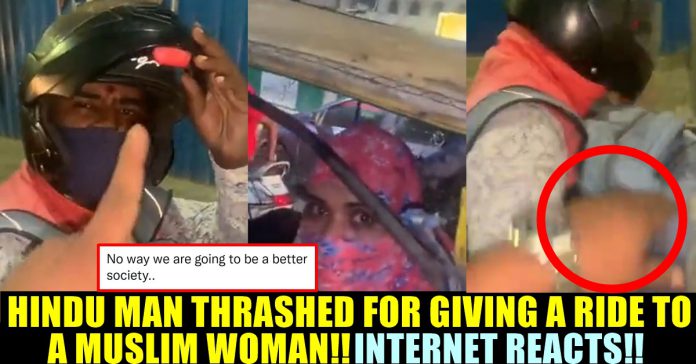 Internet Reacts To A Hindu Man Beaten For Giving A Ride To A Muslim Woman!!

In Bengaluru, a Hindu man was assaulted for giving a lift to a Muslim woman. The woman was also verbally abused for going with him. This has been going viral on social media.

The Muslim woman was not sparred too. She was also ridiculed for riding with a Hindu man. The woman was asked if she is not ashamed to go with a Hindu man. She was made to get off the bike. She was forced to give her family’s phone number. Later, after knowing that she is a married woman she was insisted to give her husband’s number. Over the phone, the men from the mob have berated her husband and have mentioned that due to his impotence the whole community is ridiculed. While the husband tried defending they have asked him if he knows the intentions of the Hindu people. When asked for the address of their residence, the woman’s husband refused to give it. She was forced to travel in auto and was said they are concerned about the burqa.

Many people have reacted to this incident and have shared their opinions on the micro blogging site, Twitter.

Hatemonger goon should be punished under appropriate Indian law.

They shud be arrested

Such incidents are bringing the Hindus much more together than ever and BJP more & more seats. Looking forward to Uniform Civil Code, @AmitShah ji !!

Not a single Hindu stopped in support of the guy, if only 2/3 person stopped and stood from the guy side the situation would have been different.

Talibaan Fanatics in India Can't Imagine The girl and Boy was beaten just because of their religious faith this fundamentalism must be stopped, Is this Bhaichaara? https://t.co/sPxmDCRm5ehttps://t.co/g3whr2BlGi https://t.co/4BFN4Bc1Gs https://t.co/0Aid7hpFpm

Karnataka Chief Minister Basavaraj S Bommai, has replied to this incident on Twitter. He has said the police has taken the necessary actions at the earliest and arrested two accused. A case has been filed and actions are taken.

In connection with the case of assault on a bike rider travelling alongwith a woman of different faith,@BlrCityPolice has acted swiftly, identified & secured 2 accused persons. A case is registered & legal action is initiated. My Govt. deals with such incidents with an iron hand.

However, has not taken place for the first time. A similar incident took place in Telangana a few days back. A Hindu Dalit boy faced a more or less similar situation for giving lift to a Muslim classmate.

Previous articleRCB Getting Hilariously Trolled For Scoring 92 Runs After Announcing About Donating To Frontline Workers !!
Next articleTaapsee Reacted To A Sexist Remark That Was Made On Her Body Transformation !!

Petrol, diesel prices saw another big cut on Tuesday after which petrol prices fell below Rs 80 per litre mark in Mumbai for the...