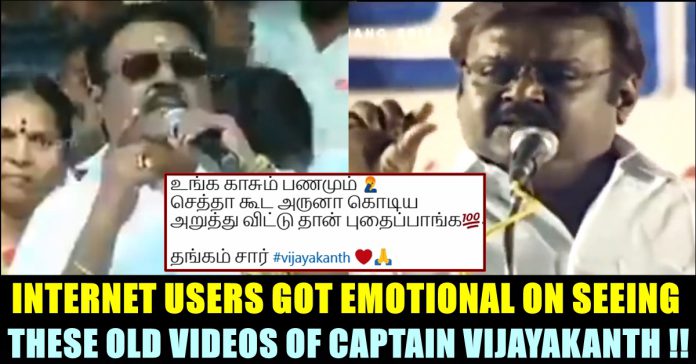 Tamil internet got emotional on seeing an year old video of actor and politician captain Vijayakanth. In the video, we could see him trying to interact with the public. Fans and followers of him are sharing the old videos of his brave speeches and praying for his come back.

The successful actor who became the Leader of the Opposition in the Tamil Nadu Legislative Assembly from 2011 to 2016, served as a Member of Legislative Assembly twice representing the constituency of Virudhachalam and Rishivandiyam respectively. He is also the founder and general secretary of his Desiya Murpokku Dravida Kazhagam.

Known for his on screen appearance, Vijayakanth gained widespread fame after entering politics post his cinema career. He is one of very few Tamil politicians and and actor to have acted only in Tamil films throughout his career. In the 2014 parliament elections, DMDK forged an alliance with BJP, a non-DMK and non-ADMK alliance of parties such as MDMK, PMK, IJK, and other small parties. However, DMDK Leader Vijayakanth lost his position as Leader of Opposition in the Tamil Nadu Legislative Assembly as eight of his MLAs handed over their resignations to the speaker of the Tamil Nadu Legislative Assembly.

After recovering from COVID 19 virus, Captain started meeting people along with his wife to campaign his party for the upcoming election. On Thursday, the DMDK leader made an announcement inviting candidates to contest in the upcoming politics on behalf of his political party. He asked them to apply from 25th of February.

Now, ahead of the 2021 assembly election, a video of Captain Vijayakanth’s recent speech is trending in the Internet with emotional reactions from the fans and followers. The video which was released in the media on 8th March, 2020, shows the politician advising people to reach their homes safely.

A twitter user shared an old video of the “Thavasi” actor saying that money won’t last forever. “When you die, you die alone. Even the rope which you are wearing in your hip will be removed. Where are you going to get the crores and crores of money that you are saving now ” he said.

“The Best Soul in Tamil Nadu Politics in Past decade” wrote an online user after seeing this video. Check out some of such reactions below :

Previous article“Teach Me How To Bite Your Lip” – Sharan Nair !! Priya Prakash Varrier’s Reply Grabbed Netizen’s Attention !!
Next articleAndrea Deleted Her Caption After Seeing The Comments !!

Due to the relaxation in lockdown implemented by the ministry of home affairs, large number of people gathered outside liquor shops in Bengaluru on...

ate on Friday evening, MS Dhoni's fans were given a rude shock as Board of Control for Cricket in India's (BCCI) acting secretary Amitabh...