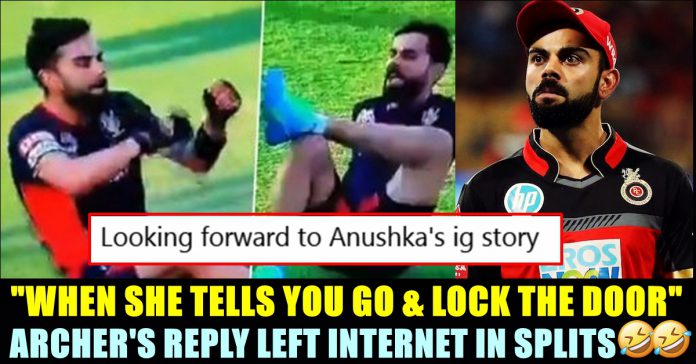 Virat Kohli is one of the cricketer who won’t keep his emotions under check. Be it a disappointment or joy, the cricketer would express it right away without thinking about the consequences. In the ongoing IPL tournament, unlike previous seasons, his RCB team is in better position and is a leading contender to win the trophy. The Indian team captain who was in a happy mood due to his team’s performance, enacted a set of strange dance moves prior the league match between Royal Challengers Bangalore and Kings 11 Punjab. On seeing the video, entire internet came up with hilarious reactions and what topped everything is the reaction of Jofra Archer.

Watch the dance moves of Kohli prior his 200th IPL match :

Check out some of the reactions for these moves of Kohli :

What a player Kohli is, all thanks to……Kiruba Kiruba! pic.twitter.com/ZaV6E8JPOv

Unlike all these fans, Jofra Archer who saw the short clipping of Kohli’s dancing talent, remembered of something else. The cricketer turned into a meme creator and said that this will be the reaction of boys when a girl says “go and lock the door”

“When she tells you go and lock the door” wrote the cricketer in her tweet which received 111k likes so far.

When she tells you go and lock the door https://t.co/5bHI9FZxgD

This reaction from Jofra received extremely hilarious replies from the internet users.

"go and lock the door.. from outside". pic.twitter.com/bpRDXJGmFV

Anushka Sharma after seeing this : pic.twitter.com/5Tz1ePs05c

As far as the match result is concerned, Royal Challengers Bangalore lost their second league against Kings 11 Punjab. Gayle and KL Rahul scored half centuries to chase down the 171 posted by the Karnataka based team. Pooran’s final ball sixer ended the thriller in Punjab’s favour.

Comment your views on this reaction of the Rajasthan Royals bowler !!

Fan Warned Theatre Owner To Keep His Screen Safe During FDFS Of BIGIL !! Check Out The Reply He Received !!

Tamil Heroine Opened About An Offer She Received From A Businessman!!

Actress Neethu Chandra who is known among Tamil audience for acting in films such as "Theeratha Vilayattu Pillai", "Aadhi Baghavan", recently opened about an...