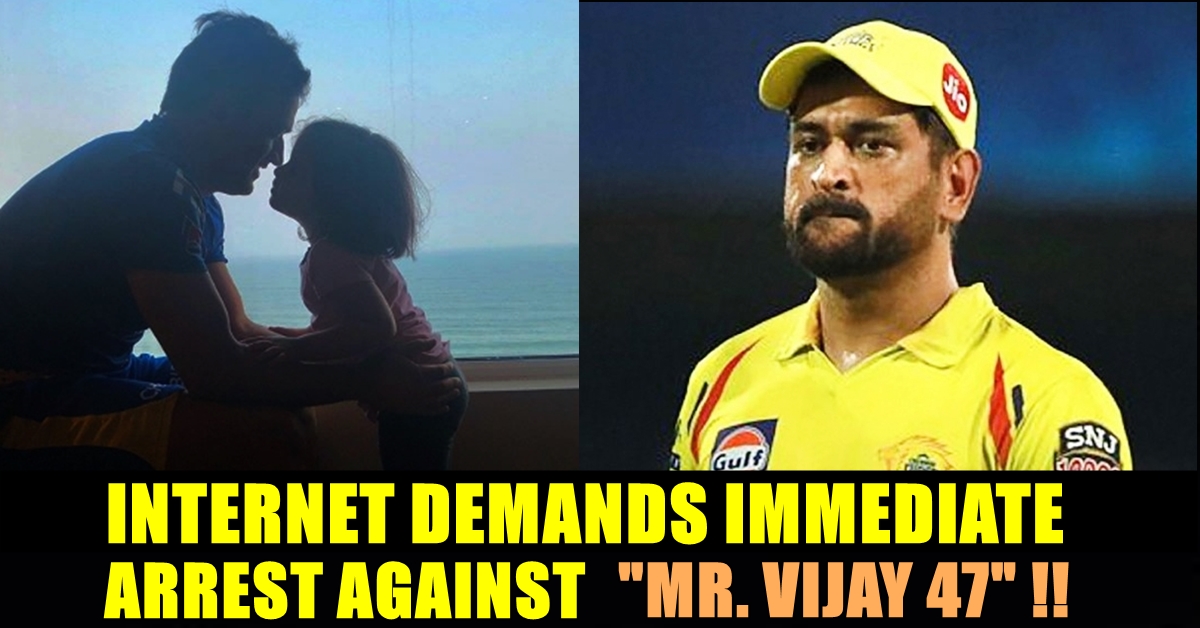 Enraged Internet users who follow cricket demanded immediate arrest against “Mr. Vijay 47” for the comments he wrote in the social media posts of Sakshi Dhoni. After Chennai Super Kings lost the match against Kolkata Knight riders, along with other fans who abused Dhoni and Jadhav, “Mr. Vijay 47” made a rape threat against the 6 year old daughter of Mahendra Singh Dhoni. When this news made it to the headlines, fans got deeply hurt and demanding arrest against the social media user who photos and screenshots are doing rounds in the internet.

An hashtag “Mr.Vijay 47” is being trended in the micro blogging social media, in a way of seeking justice. “We want justice. We want the person mr.vijay_47 behind the bars.” said one of a twitter user whereas another one said that he couldn’t get away with 2,3 days of public rage. “Will this type of sick mentality people like mr.vijay_47 get away after 2-3 days of public rage? Requesting @JharkhandPolice, @ranchipolice to find this man & take legal action for giving Dhoni’ 5 year old daughter rape threats just bcoz her father didn’t perform.” he wrote in his tweet.

@News18India Filed compliant via twitter handle to authorities to trace and frame under posco & relevant section against #Instagram abuser by name Mr.Vijay_47 #Shameless for abusing threatening and vulgar post to Mr Mahendra S Dhoni & Minor.@msdhoni we are proud of you. pic.twitter.com/hXn1Ni2sgI

mr.vijay_47, if Dhoni Sir comes to know about your tweet, you’re sure to be beaten to sixer like a ball. Remember, Ziva is the daughter of India, don’t you dare to spell her name!

The depraved b*****d should be locked up for life for thinking and saying such evil things for a child. Just for a frigging IPL he has targeted a kid. We all stand by legend @msdhoni and #Ziva pic.twitter.com/VSp373o226

So we have reached to that level whr when a player can't play well he gets threat for his daughter's rape, yes i m talking about Ziva, whr r we heading 😒 @msdhoni it's a huge request pls take legal action against mr.vijay_47 insta id of that bastard

Such sick bastards.. Mr.vijay_47. Should be found and get a mass beating and be put behind bars.. Fucking uncultured asshole.

Pardon my language but how dare he.. #Dhoni #CSK #CSKvsKKR #IPL2020 pic.twitter.com/HcexhpYxNy

Several media portals including News 18 have been reporting on the inhumane comments that surfaced in Internet after the loss of Chennai Super Kings against Kolkata Knight riders. The so-called fans who were abusing players and their personal lives for all these years, now, went beyond limit and posted comments threatening to physically hurt the former Indian captain’s six year old child Ziva Dhoni.

After CSK lost the match against KKR due to middle order collapse, fans of the CSK team were trolling Kedar Jadhav based on his performance. Some who didn’t like the way Dhoni batted, made fun of him as well. But some miscreants, posted comments in social media abusing the child. Irked with their online activity, many people including singer Chinmayi, representative of South India’s MeToo movement has expressed their anger in tweet form. The disturbing comments were mostly written in Hindi language and were captured screenshot by the fans who couldn’t tolerate seeing them.

First Tamil Film To Be Experimented On Theatres Amidst COVID 19 Crisis !!
Vijay Devarakonda’s Statement On Whom To Vote Created Controversy !! WATCH
Advertisement