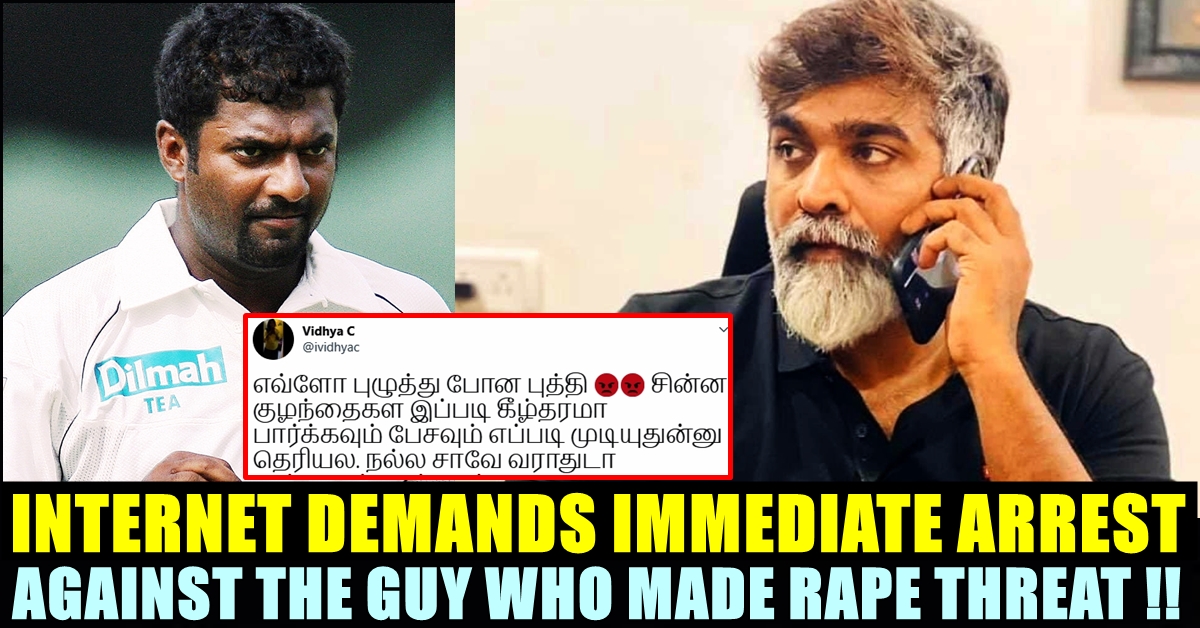 In a post shared by Vijay Sethupathi about the celebration of his Pizza movie’s 8th year anniversary, a miscreant wrote a tweet threatening to rape his daughter for accepting to act as Muttiah Muralitharan in his biographical picture. People demanding immediate arrest against the one who posted the comment. The culprit used actor Ajith kumar’s photo as display picture and identified himself as a “Thala” fan.

Vijay Sethupathi announced that he is walking out of “800 the film” after Muttiah Muralitharan requested him to remove himself from the project as he is worried about his future ventures. Hours before the announcement, the disgusting tweet was posted in the comment section of Vijay Sethupathi’s tweet.

Chinmayi, while sharing the tweet said “A tamil man expressing his difference of opinion. This is why people in this state are supporting criminals who committed sexual crimes. Is nobody in this system going to change this? A man who can say in public about raping a child is a criminal.” her tweet read.

“This is not just perversion of the highest order but the lowest level to which the society has stooped to!” wrote a twitter user on seeing this comment whereas another one said that these kind of people won’t get a normal death.

Journalist Dhanya Rajendran asked people to keep the screenshots of his tweets and profile as it will be hard for police to retrieve it once it gets locked.

People who are reporting that guy’s tweet. Pls keep screenshots etc. Cos once the account gets locked, sometimes it’s not easy for cops to retrieve it. And what we need is immediate action. #VijaySethupathi

People are also ready to file a formal complaint against the guy who posted the comment.

So happy to file a complaint too. I d love to see this man arrested.

Days before, Gujarat Police detained a 16 year old boy for allegedly making rape threats to the daughter of former Indian captain Mahendra Singh Dhoni in the social media posts of his wife Sakshi Dhoni. The accused who is a class 12 student was arrested from Mundra in Gujarat. He was picked up by the local police after a tip off from the Ranchi police which had registered a case regarding the issue last week. The accused confessed to having made the threatening message on Instagram, according to police.

This is the most inhumane activity that ever took place in online medium. Government must look for ways to find these culprits who are hiding behind a smartphone and acting as a threat to this entire country’s dignity !!