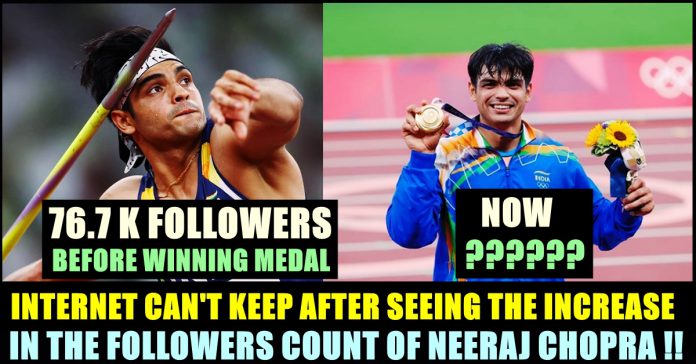 After making history with his Javelin throw ability on Saturday, 23 year old Neeraj Chopra has been grabbing headlines for various other reasons. After becoming the second Indian Athlete after Abhinav Bindra to win an individual Gold medal at the Olympic games, Neeraj Chopra is being celebrated by the entire country. He blew away the Men’s Javelin field that had some of the biggest names. The 23-year-old won the Gold medal with a best throw of 87.58m on a day when his biggest-rival Johannes Vetter blew cold and crashed out of the final even without qualifying among the top 8.

Though he did not match his personal best of 88.06 metres, he managed to script history with his magical throw on the main day. With people showing keen interest on knowing about the young lad’s background and about his journey to the Olympics, the increase in the followers count of Neeraj has grabbed the attention of the online users.

He who just had 76.7k followers prior the main day, has gained 3.1 million followers as of now. In Twitter, the athlete’s followers count increased from 90 plus thousand to 4 lakh. “Neeraj Chopra gained 2M Followers within 24 hours. The last time something like this happened was when an actress winked her eyes but this time it’s worth it.” a social media user wrote on seeing the hike whereas another user said “shocked and appalled that Neeraj Chopra only has 1.9M followers when these shirtless actors have 25-35M followers?!?? Is this what our country has come to? Is this our sanskar”

The last time something like this happened was when an actress winked her eyes but this time it's worth it.

shocked and appalled that Neeraj Chopra only has 1.9M followers when these shirtless actors have 25-35M followers?!?? Is this what our country has come to? Is this our sanskar 😡😡

@Neeraj_chopra1's Instagram shot up from 250K to 2.4M followers.

Most people will think of it as overnight success.

The Truth: 10+ years of hardwork and dedication to get to a stage big enough to represent 🇮🇳

No such thing as Overnight Success ❌

How one throw of a javelin made a nation go gaga will be beyond people's understanding for a long long time. #NeerajChopra #Tokyo2020

Winner of the Men's Javelin, Neeraj Chopra from India, might become the most popular Track and Field athlete from the Games. His Instagram followers jumped from 600K to 1.6million overnight. India's first Olympic gold since 2008 someone told me.

After javelin gold in Tokyo, Neeraj Chopra is closing in on a dizzying 2.5 million followers on Instagram.

people barely knew who Neeraj Chopra was until he got a gold. now look at how his followers will increase within hours

Neeraj is the youngest-ever Indian gold medalist in an individual event and the only one to have won gold in his Olympic debut. Brands and firms across the country are coming forward to honour Neeraj by providing him free services.