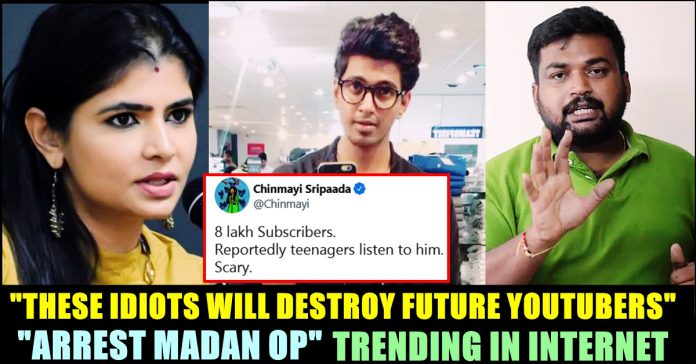 Police officials of Cyber Crime department has demanded Madan OP of Youtube fame to make his presence for investigation, according to the latest reports. Complaints were registered against him for abusing girls, kids during the live streaming of his games video. After the reports on the complaints went viral through prominent news channels, users of Internet who became aware of the “Toxic” Madan’s videos and his abusive speeches, appalled over his behaviour in live stream and demanded arrest by trending a hashtag saying “Arrest Madan OP”. Singer Chinmayi, Movie reviewer Prashant, Journalist Sonia Arunkumar and many others raised voice against the youtubes, videos of whom have created shocking waves in the micro blogging social media site.

“Madhan OP – Listened to the guys videos . Too much hate against women. Idiots like these guys are going to destroy the future of many upcoming and deserving youtubers.” said Movie reviewer and youtuber Prashanth in his tweet.

Madhan OP – Listened to the guys videos . Too much hate against women. Idiots like these guys are going to destroy the future of many upcoming and deserving youtubers.

Journaist Sonia Arunkumar has been sharing the videos of the accused and tagged Chief minister MK Stalin, Finance minister PTR, DMK’s Kanimozhi in one of her tweets. “Many would emerge doing the same if these kind of people go unpunished” she said in her tweets with “Arrest Madan OP” hashtag.

She also called out the supporters of Madan saying that they are preventing news reporters and others for talking about it.

Jason Samual who exposed TV celebrities who failed to do endorsements for the brands they got paid from, released a 2 hours 53 minute video in his youtube channel, talking about Madan and his connections. In his video, Jason accused Madan of lying, dating an underage girl and abusing cyber crime Police. He also exposed a number of people who are involved in selling obscene video of children for money in platforms such as Telegram.

Many others warned people of such personalities in the digital era.

Madan OP has given r@pe threats and m*rder threats in his videos. Referring to him as just another abusive YouTuber downplays the whole issue. #ArrestMadhanOP

A youtube channel named “Madan” which streams games such as “PUBG” with 7 lakh plus subscribers, accused of abusing girls and cheating money from small kids and students, according to a report of News 18 Tamil nadu. The complaint was made to the police officers of Chennai cyber crime. Through the audio released by News 18 report, it could be understood that a person named Madan who runs the youtube channel degrades girls by abusing them while streaming games in his youtube channel.

The Youtube Channel “Madan” was launched saying that it will teach players about the Strategies, Tips and Tricks for the now-banned game PUBG mobile. Many school studying students who are interested in playing the PUBG game received the channel by subscribing it. However, those who run the channel started making contents through abusive conversations and through degrading girls. After seeing the reception of abusive videos, a separate channel named “MADAN 18 +” was launched. The one who runs the youtube channel, initially hid his identity like the Tamil film characters and boasted about himself through his videos, according to News 18. He degraded girls and abused them in the pretext of being real. In the audios that were released in Internet, Madan could be heard abusing girls effortlessly.

Along with senior cricketers Mathew Hayden, Gautam Gambhir and others, enormous number of cricket fans criticized Riyag Paragg for his gesture after taking a...