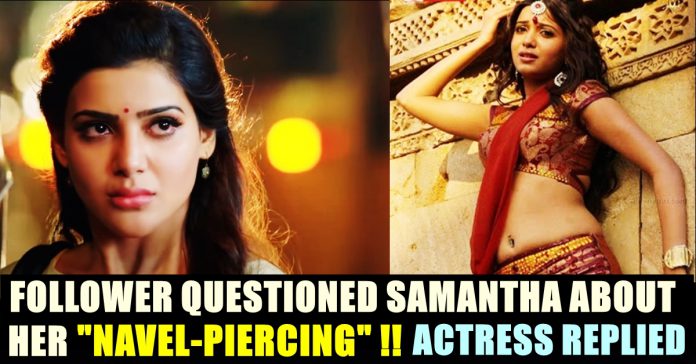 During the question and answer session Samantha recently conducted with her followers, one of a follower asked her when she pierced her navel. Surprisingly, the actress responded to it in a sportive way by uploading a 7 seconds video. In the same session, the actress got frustrated by a fan who asked whether she is pregnant and gave him/her an angry reply.

Among many cinema celebrities who are spending their lockdown period by conducting photoshoots and uploading pictures in social media platforms, actress Samantha has found a productive way to kill time and recently expressed her wish of making her followers and fans to join her. The “Kaththi” actress is very much involved in home-gardening since the lockdown implementation.

A post shared by Samantha Akkineni (@samantharuthprabhuoffl) on Nov 20, 2019 at 9:33pm PST

Most of her recent Instagram posts are about gardening and the actress admitted that she finally discovered something she is passionate about other than acting. She insisted her followers to do the same and said that it is a complete joy to make vegetables for our food on our own. Now, the actress found some time to spend for her 1 crore followers. She answered to the questions asked by few of her followers through video.

Bizarrely, one of a follower asked the actress to reveal when she pierced her navel. “When did you get your navel pierced?” he asked to which Samantha gave an reluctant answer. The actress said “Navel pierced was a wrong decision. If you are thinking about it. Don’t” she said to the follower.

To another fan who asked Samantha to reveal her height, the actress, with a little bit of shy said “I am barely 5’3. Great things comes in small packages. vohooo”

For a very long time, there has been a constant rumour about Samantha’s pregnancy. The most interesting answer from the actress came when she was asked about it by a fan. The actress who looked extremely tired of answering the question, said that she has been pregnant since the year 2017 and the baby is not coming out.

Samantha got married to Telugu actor Naga Chaitanya on October 7th of 2017. Samantha is basically born and brought up in Pallavaram, Chennai. Despite her mixed regional background, she has cited herself as a Tamilian. Samantha was schooled at Holy Angels Anglo Indian Higher Secondary School and then completed a degree in commerce at Stella Maris College, Chennai.

On the work front, Sam who was last seen Thiagaraja Kumararaja’s “Super Deluxe”, is all set to appear in the shooting spot of Vignesh Shivan’s “Kaathuvakkula Rendu Kaadhal” post lockdown.

Comment your views on these replies made by the actress !!

Previous articleLawyer Fined Rupee.1 By Supreme Court !! Check Why
Next article“Asuran” Fame Teejay Shared On The Mental Trauma He Is Going Through !!

Despite of the complaints and accusations that were emerged against Madan aka "Toxic" Madan, his supporters defended him saying that he has a heart...