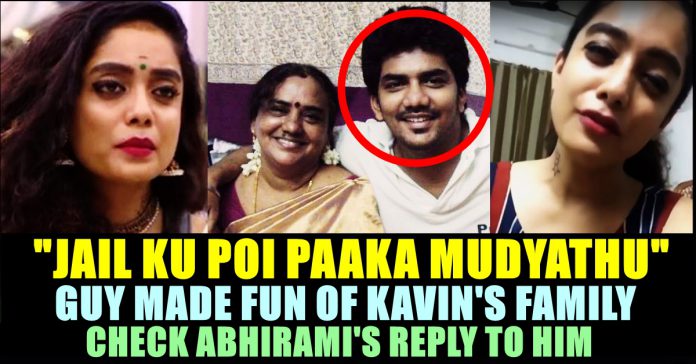 Insta User Made Fun Of Kavin’s Family !! Here’s How Abhirami Reacted To It !!

Since getting evicted from Bigg Boss house, Abhirami Venkatachalam is very much active on social media platforms, especially on Instagram. She keeps meeting her co-contestants from day 1 of the eviction. Initially she met Mohan Vaithya and Fathima Babu who are contestants got eliminated in the within three weeks. She met her dear friend Sakshi Agarwal and posted selfies of it. She even met the family members of Dance master Sandy.

Had an amazing eve … thanks to mohan appa , Rajesh vaidya sir , Charu ma and my cutie maalu ♥️

Yesterday the Nerkonda Parvai actress met the mother of her one of the best friend Sherin and posted the pictures of them together. In the caption she wrote “My sheri baby I met your mom”- love love loadsssssss of love 🦋💕”

In this post’s comment section many people reacted as the post was liked by as much as 35,000 Instagram users so far. One of a follower, unexpectedly asked Abhirami to meet the parents of Kavin and check if they are alright. To that comment, another user said that they won’t allow anyone inside jail, in a way of making joke.

Abhirami, who felt that this matter is not a subject to troll, immediately alerted the fan by asking him not to troll. “I request u ppl not to laugh cos it’s a very sensitive issue … let’s not laugh on others pain 🙏🏻”

It is notable that her friend and Kavin’s former friend Sakshi Agarwal also requested her fans not to make fun of this matter through a tweet.

For the uninitiated, the family members of Kavin haven’t paid back the money to any of the members who paid money in their chit fund and cheated Rs. 32,82,000 of them. The complaint was registered in Trichy economic crime division on 2007. The investigation started taking place since then.

Comment your views on this reply made by Abhirami !!