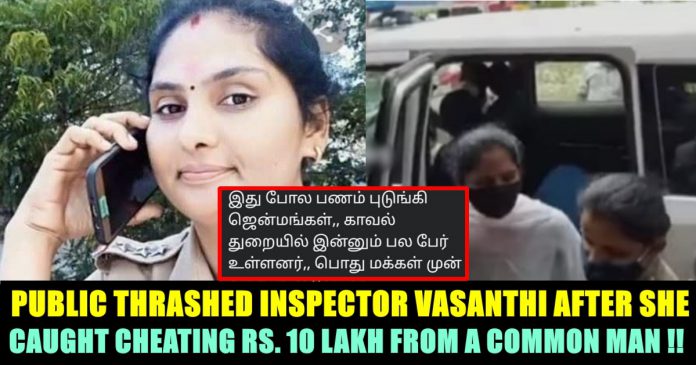 “The police department is your friend.” is a phrase that you might have heard many times. But here is a question, is this statement true? Are police really your friend? The incident of inspector Vasanthi at the Pudukottai district creates disbelief in the behaviour of the police.

Inspector Vasanthi was arrested against a case registered against her and four of her associates for extorting Rs 10 lakh from a man named Arsath.

33-year old Arsath is a tailor in profession working in a bag company at Villapuram in Madurai. The bag company owner encouraged him to start a new shop at Ilaiyangudi of Sivagangai district. He assured that he will support Arsath by giving orders. With the intention of starting his own tailoring shop, Arsath collected an amount of Rs. 10 lakh from different people. He was still in need of Rs. 5 lakh more.

Arsath went to Nagamalai at Pudukottai to get a loan of Rs. 5 lakh from Pandi who is living at Thirumangalam. It was reported that inspector Vasanthi took his bag containing Rs. 10 lakh while he was travelling to Nagamalai Pudukottai in a car on July 5, 2021, along with his brother, Baskaran. After taking away the money, the inspector told Arsath to collect the money from the Tallakulam police station limit on the next day.

Vasanthi is the inspector of Nagamalai Pudukottai police station in Samayanallur subdivision of Madurai district. Arsath went to the Tallakulam police station limit to collect his money on the 6th of July 2021. But the inspector Vasanthi claimed that there was no money in the bag instead there were only school books in it. And she threatened to book a ganja or gold smuggling case against him if he comes there again asking for the money.

The arrogance of being a police inspector made Vasanthi do such a despicable thing. She had the overconfidence that normal people would never raise voices against the police. She thought Arsath would forget about his lost money in the fear of being booked under a ganja case. The inspector along with her four associates namely K Palapandi, Kundupandi (alias Pandiaraj) of Theni, Ukkirapandi, Karthick of Silaiman snatched the money of Rs. 10 lakh from Arsath.

Arsath with the intention of getting back his money filed a case against inspector Vasanthi and her four associates. There was already a case against the inspector registered by the Dindigul North Town police in 2019 for assaulting a lawyer.

Check below the following are the reactions of netizens.