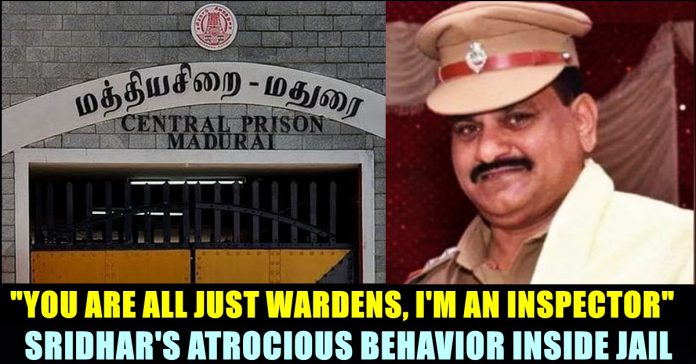 Inspector Sridhar who is currently spending his time in prison due to the demise of Jayaraj and Fenix, tried to oppress the guards in jail and attempted to make them obey his orders, according to reports. The jail authorities who got shocked by his behaviour, transferred him to Madurai Central prison.

Four police officers linked to Sathankulam lockup murder have been arrested under Section 302 of Indian Penal Code. Sub-inspectors Raghu Ganesh and Balakrishnan were the first two to get arrested regarding the case. The three others which includes Inspector Sridhar, were locked up in Peroorani’s jail in Thoothukudi district.

Initially, to avoid getting arrested, Inspector Sridhar approached an influential personality from ruling party who is one of his close contacts. He also planned to get out of the case using his power. However, as the case is being closely watched by High court, CB CID officers filed FIR and arrested him while he was on his way to his hometown Theni.

Evensince Sridhar went inside the Peroorani jail of Thoothukudi district, he started showing his power to the jail authorities and threatened them. “Considering his Inspector role, we provided him a separate cell. But he started making problem by asking us not to close his cell during night times. We said that it is a rule regularly followed in jail but he refused to listen” said Jail guards to their higher authorities.

“You are all just wardens. But I am an Inspector. After getting released from this case, I will lock you all up” said Sridhar to the guards in a threatening tone. Further Sridhar demanded Jail superintendent to serve him food. “I am his superior. You all should obey my orders.” Sridhar threatened and asked the Jail authorities to transfer him to the Madurai central jail. “If anything happens to me in this jail, you people will be responsible. Transfer me to Madurai prison” Sridhar reportedly said. Shocked authorities immediately transferred him along with four other police officers to the Madurai prison.

“Because of him, we got arrested. Only because of this kind of torture from him, we are in prison today” lamented the other arrested cops, says report. Sridhar often threatened the jail authorities by asking “You know who is behind me ??”, the report added. That influential personality from the ruling party is the reason behind this attitude of him, worried the officers in Jail.

While traveling in van to reach madurai prison, Sridhar asked one of a police officer for his cell phone. When he denied to give his phone, “I am your superior officer. You are not obeying my orders right. You will pay for this” said a frustrated Sridhar.

Sridhar continued to scold the police officer who denied to give his phone throughout the travel. One of a safety guard who watched this behaviour of Sridhar, reportedly said “I am sparing you only because you wore the “khaki” uniform once. If I hear one more word from you, I won’t be calm”. Only after his warning, Sridhar stopped talking, report suggests. Among the 5 police officers, Sridhar alone gets angry often, said the source. He who always expressing his frustration on tasteless food in jail, often criticizes the Sambar and rice served there.

Previous articleVJ Maheshwari Exposed Screenshot Of This Twitter User Who Criticized Her !!
Next articleWhen Ajith Got Upset With His Wife Shalini !! WATCH

Doctor Sharmika Getting Trolled For Her Comment On Beef Eating!!

Doctor Sharmika who is known for providing health tips to people through YouTube videos and interviews, became a subject to severe criticism after making...

Followed by several other cinema celebrities, actor and cinematographer Natti aka Nataraj who rose to fame among Tamil audience through his appearance in "Sathuranga...

Actor Sathish's comment on the attire donned by budding actress Dharsha Gupta at an event that conducted for the upcoming film "Oh My Ghost"...

Tamilnadu Theatres To Face Shut Down Because Of This !!

Producer S.R Prabhu, chief of Dream Warrior Pictures released his movie Kaidhi in online platform before the end of its theatrical run. In a...