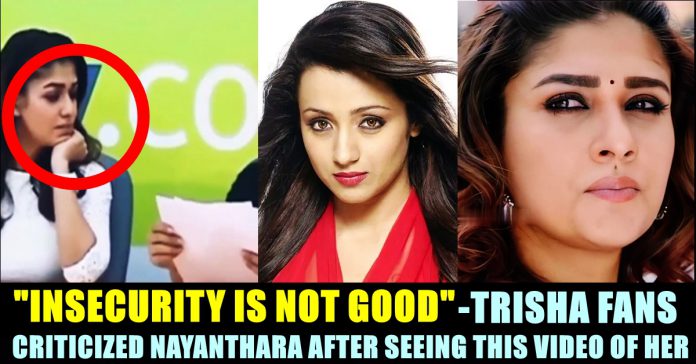 Not only Vijay and Ajith, rivalries between the fans of some of the prominent heroines, directors and music composers are also exists in this Internet era. We have seen fans of the Kollywood actors involving in verbal spat against each other in social media. Comparing two stars to conclude that their favourite star is the best is one of the constant things that is taking place among the fans of Indian cinema. Now, most recently, a comparison video of Trisha and Nayanthara got surfaced in social media and is trending in social media platforms.

Nayanthara who is fondly called as “Lady Superstar” by her fans, is one of the highest paid actress in Kollywood right now. Having acted in at least 70 films, Nayanthara is currently concentrating in both commercial and critically acclaimed films.

She is one of the very few actresses in India who is constantly acting in female oriented films and excelling in it. Some of the highly appreciated solo films of her are Aramm, Kolamavu Kokila, Imaikka Nodigal etc. She paired with almost all the top tier actors of Kollywood including the new ones such as Sivakarthikeyan and Vijay Sethupathi.

Trisha who got debuted to Kollywood in 2002, is also enjoying a huge fan base. Her acting performances in films such as “Saami”, “Gilli”, “Vinnai Thaandi Varuvaya”, “96” gained her a separate fan base. A half a dozen of her film got completed and is awaiting for the theatrical release. Comparison between these two actresses who entered in film industry during a similar period would often take place among fans. Even a film titled “Trisha Illana Nayanthara” got released in theatres and ran successfully.

Now, a video of the speeches of both the actress regarding a question on their opinions on other heroines has got surfaced in social media platforms. In an interview that allegedly took place in 2015, actress Nayanthara, when she was asked to name a Kollywood heroine who is doing good roles, could be seen answering “no one”.

“Doing good roles ?? No one” Nayanthara could be heard answering. The same video shows Trisha giving credits to Anushka, Nayanthara and Samantha for their respective works. In the video that was shot in 2016, Trisha says “I like Anushka. She is doing lot of different works. I like the way she carries herself. I like some of Nayan’s films. I think she is also someone who is very very hard working. I like Samantha. These three, I think they are doing very very good works” Trisha says.

Adding the video, a Instagram page named Trish Krish wrote “The difference 😌 Giving credit where due does not make you less than them. Insecurity is not good” in a way of criticizing Nayanthara. Watch the video below :

On the work front Nayanthara whose “Nizhal” got released recently, is going to be appear in films such as “Nettri Kann”, “Annaththe”, “Kaathu Vaakula Rendu Kaadhal” etc. Trisha’s “Raangi”, “Paramapatha Aatam”, “Garjanai” are awaiting for release.

After the arrest, updates on the case regarding the faculty of PSBB named Rajagopalan harassing female students has been surfacing in daily basis. The...

After replying to a twitter user who requested to make a Tik Tok guy slip in bathroom, Thiruvannamalai police made him to apologize for...