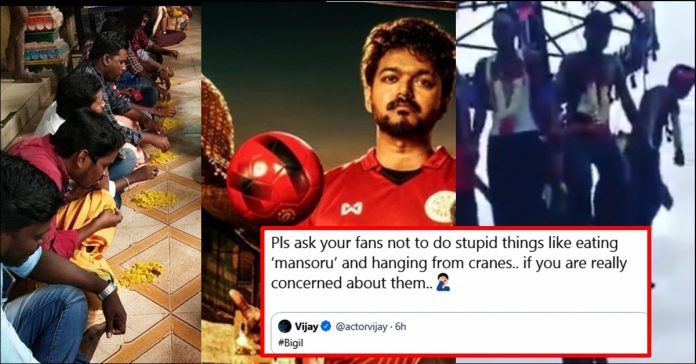 Actor Vijay has a strongest fan base comparing to other actors in Kollywood. “Bigil”, actor Vijay’s 63rd film after A.R Murugadoss’s “Sarkar”, is the most anticipated film of 2019. The actor who enjoys a huge fan base in Tamilnadu, is going to appear in three different get up in the movie after “Mersal”. The film marks the third collaboration between actor Vijay and director Atlee.

In a way of adding fuel to the expectation level, the makers of the movie released the first ever official trailer of “Bigil” only to set the Internet in fire. As soon as the trailer released, it reached more than 1 million likes in a matter of minutes and is marching towards 3 million.

Fans of the actor are eagerly waiting to celebrate their favourite actor on screen from 25th of this month. We have came across many news saying that the actor’s fans are all set to witness Vijay after one long year. Dozens of fans of actor Vijay ate ‘Man Soru’ at a temple in Mayiladuthurai praying
for the smooth release of his upcoming film ‘Bigil’.

As Vijay’s upcoming film ‘Bigil’ is embroiled in controversies and lawsuits, fans came together to eat ‘Man Soru’ (Eating food on the floor or the ground without a plate) at the Sri Prasanna Mariamman Temple. In Tirunelveli, fans of the actor installed 12 CCTV surveillance cameras instead of erecting banners and pasting posters.

Now to our shock, a video of the fans hanging from a crane to show their love towards their favourite actor. The video of the same got surfaced on Internet and receiving severe criticism. Many expressed their disappointment on seeing the video.

Pls ask your fans not to do stupid things like eating ‘mansoru’ and hanging from cranes.. if you are really concerned about them..🤦🏻‍♂️ https://t.co/VTPtZtBarL

Meanwhile, Gayathri Raguramm, former Bigg Boss contestant and popular choreographer also expressed her emotions on seeing the video of Vijay fans hanging from crane. She requested them to celebrate the movie by watching it in theatres instead of hurting themselves.

To #Bigil #vijaysir fans please do not harm yourself. I’m also biggest fan vijay sir. Show ur love and verithanam by watching this movie how many ever times / Feeding poor and taking care of ur family. Please it’s a request from vijay sir fan. #vijaylove pic.twitter.com/aIJ6MqRiuw

Comment your views on this activities of celebrity fans !!

With "Viruman" releasing on 12th of August across the theatres in Tamil nadu, a report about Aditi Shankar who is going to make her...

In a recent speech she delivered for the Chennai literary festival 2023 that took place at Anna Centenary library, DMK's MP Kanimozhi criticized Sivakarthikeyan's...