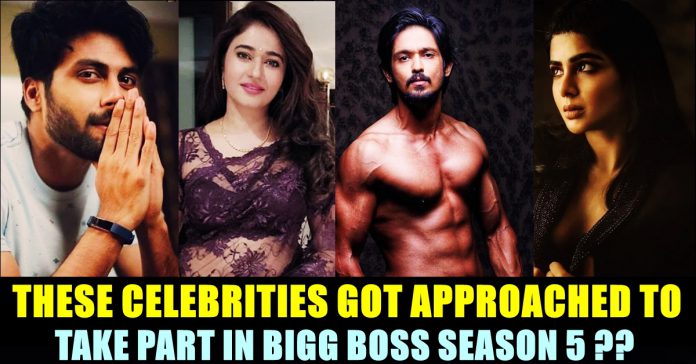 Days after the reports on the change of host for the season 5 of Tamil Bigg Boss surfaced, now, an exclusive buzz on the first ever contestant of the reality game show is doing rounds in social media platforms. Earlier, it was reported that Vijay TV management, along with endemol shine is in talks with actor Simbu to host the fifth season due to the hectic schedule of actor Kamal Haasan between June and September.

Now, for the fifth season of the show which is expected to take place from June or July, makers started working on the initial productions it seems. Host Kamal Haasan is pretty much active in the electoral politics and is going to contest in the upcoming assembly elections as a Chief minister candidate. It is also notable that the leader of the political party is going to contest in Coimbatore-south competing with BJP’s Vanathi Srinivasan and Congress’s Mayura Jayakumar.

If Kamal Haasan wins the poll by gaining more number of votes, he would have to serve as an MLA for the people of Coimbatore-South. He also have to look after the people who belong to the constituencies which was won by the candidates of “Makkal Needhi Maiam” after the election result. Amidst such situation, a buzz has surfaced saying that Vijay TV is in talks with actor Simbu to host the upcoming Bigg Boss season.

Now, a recent buzz emerged saying that actor Nakhul, popular actor and playback singer is in talks to take part in the show as a contestant. The actor who was last seen in a 2018 flick named “Sei” is pretty much active in social media platforms nowadays. His upcoming film “Eriyum Kannadi” is expected to hit the screens soon.

The channel is also looking to get “Cooku with Comali” fame Kani to take part in the show, according to reports.

A report of Indiaglitz said that the first round of talks have been held with various celebrities including with those who are associated with Vijay TV’s “Cooku with Comali” show. The report suggested that Pavithra Lakshmi, Dharsha Gupta, Ashwin and Sivaangi were approached so far. Actor Azeem who was supposed to enter the house as a wild card contestant of season 4 will be considered it seems.

Actress Hema of “Pandiyan stores” fame, Actor turned Politician Radha Ravi, Raai Laxmi, Poonam Bajwa, Kiran and Sri reddy were the names that are doing rounds regarding the contestants list of season 5. Various changes in the initial list of participants is expected.

However, we have to wait for three more months to discover the official confirmed list of Tamil Bigg Boss 5 contestants and host. Comment your views on the above mentioned celebrities getting part in the show as contestants !!

Previous articleGenelia Replied To The Viral Video Of Her Husband & Preity Zinta !! Priceless
Next articleIndian Pacer Jasprit Bumrah Got Slammed For A Recent Picture He Uploaded !!

Television actress Mahalakshmi who recently married producer Ravinder Chandrasekhar, in an interview with Sun Television, answered to a question on whether she married him...