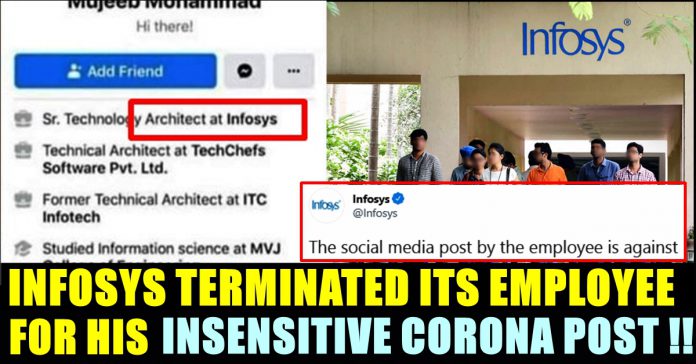 For uploading a threatening facebook post about spreading Coronavirus, a Man who is an employee of infosys got sacked by his company. In his post, the man named as Mujeeb Mohammad called people to spread the virus to public. Infosys informed about the termination through their official twitter account.

“Infosys has completed its investigation on the social media post by one of its employees and we believe that this is not a case of mistaken identity. The social media post by the employee is against Infosys’ code of conduct and its commitment to responsible social sharing. Infosys has a zero tolerance policy towards such acts and has accordingly, terminated the services of the employee.” the tweets of Infosys read.

The social media post by the employee is against Infosys’ code of conduct and its commitment to responsible social sharing. Infosys has a zero tolerance policy towards such acts and has accordingly, terminated the services of the employee. (2/2)

“Let’s join hands, go out and sneeze with open mouth in public. Spread the virus” his post in facebook read.

Well done @Infosys for terminating this asshole. Human beings like him are 1000 times deadlier than any virus we ever know !!

Below is His post sometime back , asking people to spread the virus. pic.twitter.com/U65tyrxEBi

According to police officers, the accused who was accused on Friday, allegedly posted a prank tweet to spread the coronavirus. “The accused Mujeeb Mohammad was arrested on Friday evening under sections 505, 207 and 190 of the Indian Penal Code for his social media post.” Deputy commissioner of Police Kuldeep Jain said.

The accused was produced in a local court on Saturday which remanded him to police custody for seven days for interrogation and investigation into the cyber crime. “As Muhammad is in our custody, we will interrogate him to ascertain why he uploaded such post” Kuldeep said.

The police picked up the 38 year old from his residence and seized two mobile phones and a laptop from his possession. “Mohammad did not give any valuable reason for uploading such a post but casually said ‘I just felt like posting it’. He was very casual” the police officer added.

Before confirming that Mohammad is responsible for his post, Infosys, in their tweet said “We are deeply concerned with an inappropriate post being attributed to an Infosys employee. We strongly reaffirm our commitment to responsible social-sharing. Our preliminary enquiry, and discussions with our employee suggest that this could be a case of a mistaken identity.”

However, given the seriousness with which we take such matters, we are investigating this further and will also assist with any independent investigation. The company would take appropriate action based on its investigation.

The coronavirus pandemic is a threat across the world. Most of the countries ordered its citizens to stay at home and to take safety measurements such as wearing mask while going out of home to buy essentials. Comment your views on this decision made by Infosys against it employee !!

A number of female Instagram users, accused a celebrity photographer named Prashanth for sexually harassing them through the photo/video posting online app. Screenshots of...