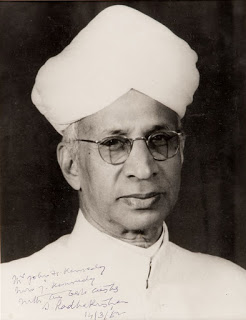 On Teachers’ Day we list out some of the most famous teachers that India has produced.
Dr Sarvepalli Radhakrishnan
The man whose birthday we celebrate as Teachers’ Day in India!
Dr Sarvepalli Radhakrishnan, the first Vice President and the second President of the country, was first and foremost a teacher.
Coming from an extremely humble background, Dr Radhakrishnan began his teaching career sat the Madras Presidency College.
Eventually, he would go on to become Professor of Philosophy at the University of Mysore, represent the University of Calcutta at international congresses in the UK and the US and even lecture Oxford on Comparative Religion.
Even though he received the title of the Earl of Willingdon he never once used it in his personal life, rather preferring to use the title he had earned on his merit — ‘Doctor’.
The story goes that after he was elected to be the President of India some of his students and friends asked him if they could celebrate his birthday.
His reply was this: “Instead of celebrating my birthday, it would be my proud privilege if 5 September is observed as Teachers’ Day.”
And so it was. The day, since then, has been celebrated in India as Teachers’ Day.
Guru Rabindranath Tagore

Arguably one of the most revered figure in the country, Rabindranath Tagore’s legacy in the form of Santiniketan is perhaps the most lasting.
At a time when rote learning and classroom teaching was hailed, Tagore took teaching out of the confines of the four walls and formed a school, which he hoped would be ‘the connecting thread between India and the world (and) a world centre for the study of humanity somewhere beyond the limits of nation and geography’.
Teaching at this school was often done under trees.
Tagore personally mentored his students and guided them not just academically but also emotionally and spiritually and invested his Nobel Prize money into the school as well as sought for funds across the world.
Visva-Bharati is now a university of repute and will perhaps be the greatest gift to the Indian education system.
Savitribai Phule

Being the first female teacher of the first women’s school in India wasn’t an easy job.
So when Savitribai Phule who along with her husband started a school for girls in 1948, it was a cause for outrage in the Bramhin-dominated city of Pune.
As Phule would walk to school, she would be abused as rotten eggs, cow dung, tomatoes and stones would be hurled at her.
She kept at it. And by the end of the year, the Phules had opened five more schools for girls.
Along with her husband, Phule also worked towards dealing with issues such as widow remarriages and untouchability among others.
When she wasn’t changing the world, Savitribai Phule also wrote poetry and is widely considered as one of the pioneering voices in Marathi poetry.
Sure it was a hard task but seeing how girls are beating boys in practically every competitive examination, we’d say she did one helluva job!
Nissim Ezekiel

Talking of poets Nissim Ezekiel, who helped the Indian English writing break away from its colonial shackles, was also a teacher.
Ezekiel’s poems that helped Indian English find its voice as also inspired an entire generation of poets.
Nissim Ezekiel mentored several of these young poets and also taught hundreds of wide-eyed students of English literature in Mumbai from 1947 to as late as the 1990s.
Ezekiel died in 2004 after a long battle with Alzheimer’s disease.
Dr Manmohan Singh

Long before he became the ‘leader that other leaders love’ Dr Manmohan Singh was a teacher.
He has held various teaching positions in the Panjab University, Delhi School of Economics, University of Delhi and the Jawaharlal Nehru University among others.
The soft-spoken Singh has often come under fire from various quarters for being meek and accused of being incapable of action which always makes us wonder how he would’ve handle a class of unruly Delhi students.
Pt Sawai Gandharva

Rambhau Kundgolkar, better known by his stage name of Sawai Gandharva, was the teacher of some of the greatest singers of the Hindustani classical music including Pt Bhimsen Joshi and Gangubai Hangal among others.
Gandharva, the best-known disciple of Ustad Abdul Karim Khan, considered by some as the founder of the Kirana Gharana, met the guru at his father’s employer’s house.
Khan who noticed the young boy singing asked his host about him.
When the Ustad was told that he was an aspiring singer wanting to learn music from him, Khan invited the young Gandharva to join him on the condition that he would spend eight years learning under him.
Incidentally the most celebrated singer of the Kirana Gharana never completed his education. Against his guru’s wishes, Sawai Gandharva joined a drama company and became a stage singer.
In 1936 a young disciple would approach him to learn music. In between the odd jobs that he would make him do, the singer would also teach him music. That young disciple was Pt Bhimsen Joshi.
Ustad Alla Rakha Khan

The greatest exponent of the tabla, Ustad Alla Rakha Khan was also a beloved teacher to many, many students.
Known as Abbaji to his disciples, Khan like most of his contemporaries ran away from home to learn the musical instrument of his choice.
Eventually he would become the first artist to play a tabla solo at the All India Radio — making everyone sit up and acknowledge the importance of the instrument that is usually an accompaniment to string instruments or vocals.
By playing with Hindustani as well as Carnatic musicians, Alla Rakha bridged the gap between the two styles of music.
During the peak of his career, Pt Ravi Shankar would only play with Alla Rakha at concerts in India and abroad.
Even though Khan trained a lot of young tabla players, his most famous disciple would be his son — Ustad Zakir Husain, the man who would take the tabla to a new generation of musical exponents and listeners.

Yep, it’s true! The man who gave us some of the most endearing stories of Swami, his friends and Malgudi was once a teacher though for a very, very short while.
RK Narayan, who failed a year and took four years to complete his BA was never really taken in by the idea of having a full-time job.
According to RK Ramchandran — his younger brother — after he completed his graduation, his father insisted that he get himself a paying job because he never thought of writing as a secure profession.
So using some contact, he got the author a teaching position at a school Chennapatna near Mysore.
As it happened the headmaster asked him to substitute for a physical training master. Narayan protested but was shown the book which said that he would have to perform any duty that would be asked of him.
So even as the boys waited for their drill master to arrive, Narayan put in his papers and returned to Mysore.
And that was the first and last job he ever held!
CK Prahalad

Best known for his concepts of Core Competency and Bottom of Pyramid, Prahalad held the prestigious post of Distinguished University Professor at the Stephen M. Ross School of Business in the University of Michigan.
During his lifetime Prahalad was recognised as one of the most influential thinkers of our times.
Business Week called him ‘a brilliant teacher at the University of Michigan, he may well be the most influential thinker on business strategy today’.
Professor Prahalad died in San Diego in 2011 of a previously undiagnosed lung illness.
Dr A P J Abdul Kalam

Dr Kalam  was always the most popular of all the presidents of India. He had a multi-dimensional personality. He was well known for his passion for and contribution to science and technology in general, and space and nuclear science in particular. He was the one who made India truly nuclear. It was in 1974 that India carried out its first nuclear test. The next was in 1998 – the Pokhran-II –  and through this test Dr Kalam declared to the world India’s nuclear status with a bang.

Called the ‘Missile Man’ of India, Dr Kalam was a great inspiration for scores and scores of young minds. He always preferred to meet and talk with children. Even as a President he was never bothered about security or protocols. He chose to spend time with school and college students – just to interact and inspire.
Maybe he was an oracle for he always used to say he would like to be remembered as a teacher. In an interview he said, “If the people remember me as a good teacher, that will be the biggest honour for me…,” and even when death seized him he was lecturing students at the Indian Institute of Management, Shillong. He believed, “Teaching is a very noble profession that shapes the character, calibre and future of an individual… youth have a dream and also have a pain. The pain comes out of their dream; they want to live in a prosperous, happy and peaceful India. This type of student’s environment ignites me and leads me to interact with young minds.”

For Shouting At ISRO Official At Press Meet, Reporter Got Thrashed By Public !! MUST CHECK !!

In the early hours of Saturday, Indian space agency ISRO’s plan to soft-land Chandrayaan-2’s Vikram module on the lunar surface did not go as...