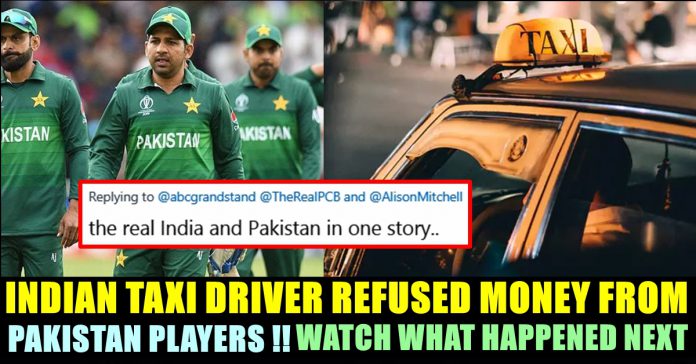 The rivalry between team India of cricket and team Pakistan has always been a never ending one. As the countries stopped playing one to one due to security concerns in the matches involved with the players of Pakistan, both the teams faced each other in the matches conducted by ICC.

Now Pakistan is playing against Australia in Australia. Australia crushed Pakistan by an innings and five runs in the first Test in Brisbane. The Aussies took an unassailable 1-0 lead in the two-match series with the victory. After trailing the host by 340 runs at the start of second innings, Pakistan lost wickets at regular intervals. Babar Azam and Mohammad Rizwan gave some fight to Australia but ultimately the score proved too much for them as they were bowled out for 335 late on the fourth day. Josh Hazlewood was the pick of the bowlers for Australia as he took 4 wickets for 63 runs.

The presenter revealed that when the cricketers offered him taxi fare, he refused to take any money. However, the Pakistani cricketers returned the favour with a generous act and invited the driver to have dinner with them.

“He showed the photograph on his phone of him sitting at the table at the restaurant with five members of the Pakistan cricket team,” she added. Yasir Shah, Shaheen Afridi and Nasir Shah were three Pakistani cricketers among the five. As soon as she revealed this incident on air, it went viral in social media platforms as it was uploaded in ABC Grandstand.

🚕🏏️🚖 The heartwearming story of the Indian taxi driver and five @TheRealPCB players.❤️

Though the players of Pakistan cricket team failed to won the match, they won the hearts of million with their gesture. Many Indians felt proud of the taxi driver and expressed their happiness in the comment section as well.

What do you think on this incident that took place in Australia ?? Comment your views below !!

Previous articleTracker Said That The Look Of “Thalaivi” Is Stunning !! Actress Reacts !!
Next articleParvathy Blamed Arjun Reddy In The Presence Of Vijay Devarakonda !! WATCH !!

After the statement of Pakistan Prime minister Imran khan linking the rise of rape cases with "vulgarity" made headlines across the globe, Tamil nadu...