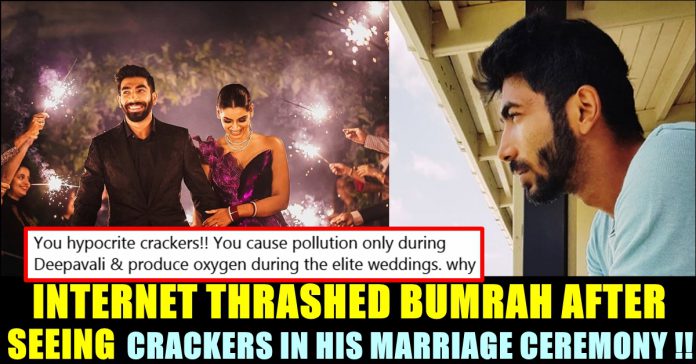 Indian Pacer Jasprit Bumrah Got Slammed For A Recent Picture He Uploaded !!

Days after getting marries with sports presenter Sanjana Ganesan, Indian pacer Jasprit Bumrah who is known for his unique run up and excellent yorkers, came up with a couple of pictures from his marriage event with a heartfelt caption. Now, his post is trending in the micro blogging social media site for all the reasons. On seeing crackers being used in his marriage through one of the pictures uploaded by the cricketer, enormous number of netizens came up with the screen shot of Bumrah’s old tweet which was posted during Diwali festival, advising public not to burst crackers.

Sharing a couple of pictures of himself with his wife during their marriage event, on Friday, Bumrah uploaded a post in his official twitter and Instagram account writing “The last few days have been nothing short of absolutely magical! We are so grateful for all the love & wishes we’ve received. Thank you.”

On seeing crackers being used in the marriage ceremony as a part of the celebration, social media users got triggered and started slamming the pacer for one of his old posts. During every year’s Diwali festival, a number of national celebrities who are associated with sports and cinema industry, would come up with tweets and posts advising people not to burst crackers in order to keep our environment safe.

Bumrah also uploaded a picture with his family and added an hashtag saying “No To crackers” during one of the Diwali festivals.

Triggered with this contradiction of the 27 year old cricketer, many people started criticizing him. “Say yes to crackers except Diwali.” wrote a twitter user to mock the cricketer whereas another one said “say no to crackers but only during diwali? looks like only diwali crackers cause pollution and not the ones used in celebrity weddings”

As a result of such reactions, hashtag “Diwali” started trending in the micro blogging social media site India wide. Check out some of their reactions below :

You hypocrite crackers!! You cause pollution only during Deepavali & produce oxygen during the elite weddings. why crackers why? pic.twitter.com/C0AX9i3hl5

Pic 1 : Tweets No To Crackers On #Diwali
Pic 2 : Uses Firecrackers For His Own #wedding

All Gyan for Others only 😡😡 pic.twitter.com/x10xBTx6UP

say no to crackers but only during diwali?
looks like only diwali crackers cause pollution and not the ones used in celebrity weddings

On Diwali, Jasprit Bumrah said #SayNoToCrackers in his post. But now shamelessly.. pic.twitter.com/Jp0pzecCpy

Most recently, Indian captain Virat Kohli became a victim of similar controversy as his birthday video contained a crackers bursting footage. However, it was clarified that the footage consisted on the celebratory video was from archival footage of UAE’s Flag day celebrations. Read : Kohli Caught Into Controversy For Bursting Crackers !!

Previous articleInitial Talks With The Celebrities Regarding BIGG BOSS 5 Started ??
Next article“Am I A Snake Or Lizard To Crawl ??” CM Edappadi K Pazhaniswamy Replied To Stalin’s Derogatory Comment

Doctor Vennila who produced health certificate for Jayaraj and Fenix on 20th of July before Police officers of Sathankulam sending them to Kovilpatti sub...