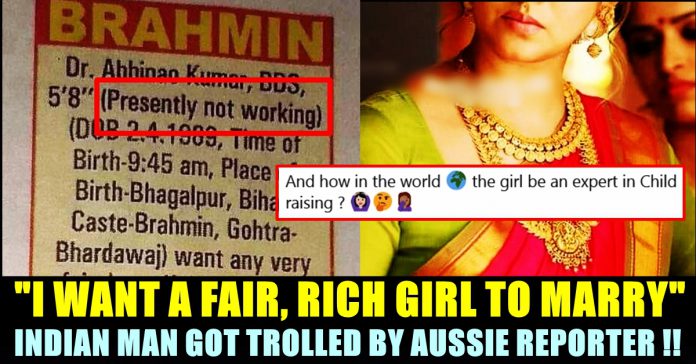 Getting their names registered in matrimonial sites is highly believed as one of the best way to find grooms or brides in our country. In order to get a partner with right qualities, one should fill the requirements column to let others know about their expectations. In a similar way, a Indian man who introduces himself as Dr.Abhinao Kumar, said that he is not working currently but wants a beautiful girl to marry in the paper advertisement he provided.

This advertisement he gave is now world famous as it grabbed the attention of a popular Australian journalist, Siobhan Heanue. In the advertisement, Abhinao expressed his wish of having a wife who could cook and could increase India’s military and sports capabilities. His advertisement started with a bold, large combination of letters which said “BRAHMIN”. The picture of the paper ad which was uploaded by one Mohammad Zubair read “Dr. Abhinao Kumar, BDS, 5’8″ ( Presently not working) (D.O.B 2.4.1989, Time of Birth 9 : 45 AM, Place of Birth : Bhagalpur, Bihar, Caste-Brahmin, Ghotra- Bharadwaj) want any very fair, beautiful, very loyal, very trustworthy, loving, caring, brave, powerful, rich, EXTREMELY PATRIOTIC WITH INDIA WITH A KEEN DESIRE TO INCREASE INDIA’S MILITARY AND SPORTS CAPABILITIES, an extremist but compassionate, an expert in child raising and an excellent cook, Indian Hindu Brahmin working from Jharkhand or Bihar. Sampurna Kundli Milan & 36 Gunas Matching must.”

Check out the advertisement here :

Mohammad Zubair whos shared this picture in his twitter account said that this is the best matrimonial ad and his tweet went extremely viral among the users of micro blogging social media site. Check out his tweet here :

Siobhan Heanue, an Australian journalist and South Asia correspondent at Australian Broadcasting Corporation, based in New Delhi, saw this tweet and immediately expressed her thoughts on it. She who has 17 thousand followers in twitter said that this advertisement is next level comparing to all the matrimonial advertisements of Indian citizens.

“Indian matrimonial ads are full-on but this is next level. Unemployed bloke wants beautiful wife who can cook dinner and boost India’s military power on the side.” she wrote in her tweet to mock Abhinao who published the advertisement.

Indian matrimonial ads are full-on but this is next level. Unemployed bloke wants beautiful wife who can cook dinner and boost India’s military power on the side. https://t.co/5LrKVjGm87

This tweet is receiving extremely hilarious responses from her followers and from the users of Twitter, trolling the wannabe groom of a well educated, beautiful, powerful, rich bride. Check out some of their reactions below :

I really want to find out how his search for the perfect ‘extremist but compassionate’ wife goes.

It laughable at first, but then you realise the guy posting this ad has a doctorate degree.

He Must be a Bhakht.

Comment your views on this disgraceful matrimonial ad of a well educated doctor !!