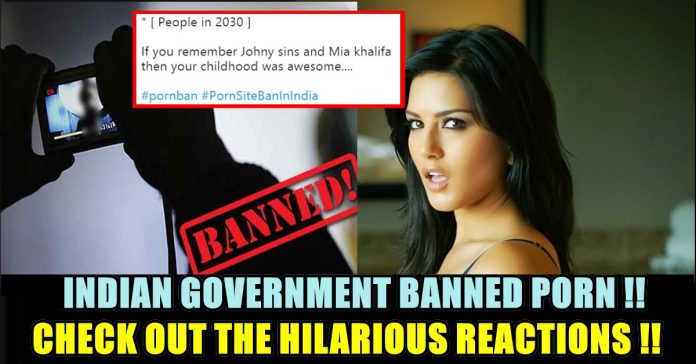 The Department of Telecommunications instructed all the ISPs to take steps immediately for blocking 827 websites as directed by MeitY and Uttarakhand HC. Reliance Jio has already followed the order and blocked the popular adult websites while other telecom operators such as Airtel, Vodafone, etc. will also be doing the same.

However, people at large are not happy with this decision as they feel that what they should watch and what not should be their choice and not anybody else’s. Some social media users have advised that for accessing adult websites, people should use a VPN (virtual private network) as the ban is at ISP and local level only.

Twitter is flooded with hilarious reactions over this ban. Here are some of the selected tweets:

#India is slowing converting as #northKorea under #bjp first they banned #beef and know they are banning #porn…and later they will ban #freedom #democracy #secularism #FreedomOfSpeech #FreedomOfExpression .#pornban

Hey dude how do you react to #Pornban @RahulGandhi ? Which one will you miss a lot ?

How is #pornban going to help reduce rape? On the contrary, ppl who use d internet to suppress severe sexual urges would B more likey to rape. Der is also a great probability to #traffick more #victims into #prostitution to #satiate this need. Curbing one evil gives rise to more.

I am a Single with Jio Sim without UC Browser .. Will Society Accept me ? #PornBan

What should guys like us who can’t get a girlfriend do to satisfy oru sexual desires ?
-thenationwantstoknow #pornban

Not cool @reliancejio
Bait us with free internet and then take away the reason we got the free SIMs for, in the first place.
Not cool at all. #pornban

Sorry if anyone gets offended with this