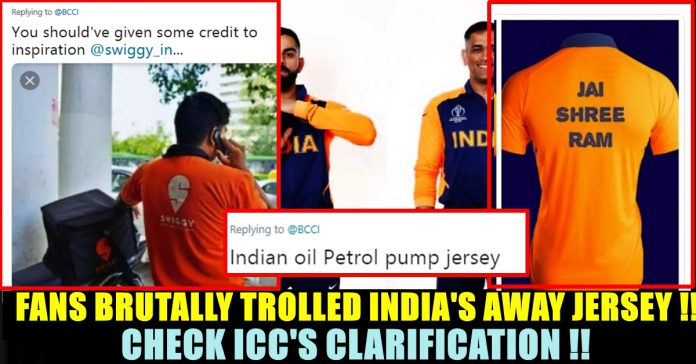 MS Dhoni, Virat Kohli and other members of the Indian cricket team posed for the first time in their away jersey ahead of the India vs England World Cup 2019 clash on Sunday. The Indian cricket team, in a first, will be donning their away kit at the World Cup 2019 match against the hosts in Birmingham. With the semi-finals spot at stake, India will hope they can maintain their good fortune in the away jersey as well. India will sport the away kit since even England have a blue jersey, though lighter in colour.

A change in colours was required, as per the new International Cricket Council (ICC) mandate, but the question over why the ‘Orange’ colour was selected is being asked all across the country.

The ICC suggested that for World Cup matches, if there happens to be a clash in the colour of the jerseys, the designated away team will wear alternate colours. Just like India, England, Afghanistan, Sri Lanka wear blue coloured jerseys and hence there was a need to mark a distinction. Even in the Afghanistan vs India clash, the Afghans had worn their away kit (red and blue), as per the ICC verdict. 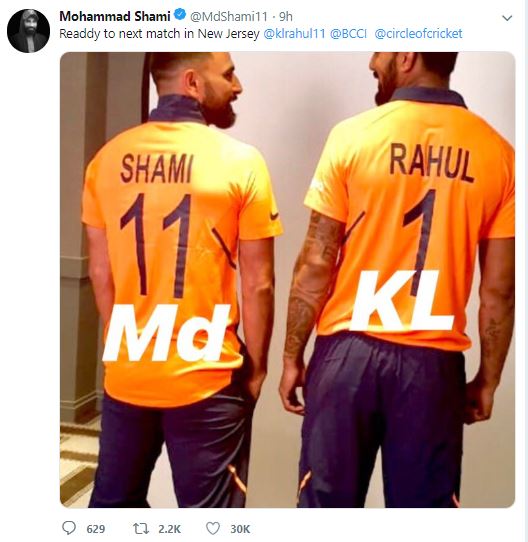 However it was trolled by fans hilariously as it looked like Petrol bump workers uniform and also some compared it to the BJP’s party flag. Check out some of their reactions :

Great Jersey guys … see even Saif Bhai can’t wait to watch the next match in the Away Jersey… #TeamIndia  #CWC19  #MenInOrange pic.twitter.com/2YXfh0j2WM

Is it true that names of the players at the backside will be prefixed with the word
YOGI ?
Fr example.
YOGI ROHIT, YOGI VIRAT,
YOGI BOOMRAH, YOGI DHONI , YOGI SHAMI ? #CWC2019 😁😂😂😂

However ICC gave an explanation for the color BCCI chose for away matches. As for the colour of India’s jersey, an ICC source had confirmed while speaking to ANI news agency that multiple colour options were given to the Board of Control for Cricket in India (BCCI) to choose from. It is believed that keeping the fan connection in mind, the BCCI went with orange themed jersey as an existing T20 kit already had this colour.

“Colour options were given to BCCI and they chose the colour combination that looked the best to them. The whole idea is to be different from blue as England also wears the same shade of blue as India,” an ICC source told ANI.

“Also the design (orange) is taken from India’s old T20 jersey which had orange in it. The designers who are sitting in the USA designed this jersey from something that already existed and not something completely new that fans don’t identify with,” the source added.

Previous articleTwitter Exploded When Every Team Of IPL Joined To Celebrate India’s Winning Streak !!
Next articleRiythvika Declared This Current Bigg Boss Contestant As The Next Version Of Herself ?? Check Out !!

A 11 minute long leaked audio on a female teacher named Kalaiselvi alking about caste to a student and encouraging him to discriminate other...