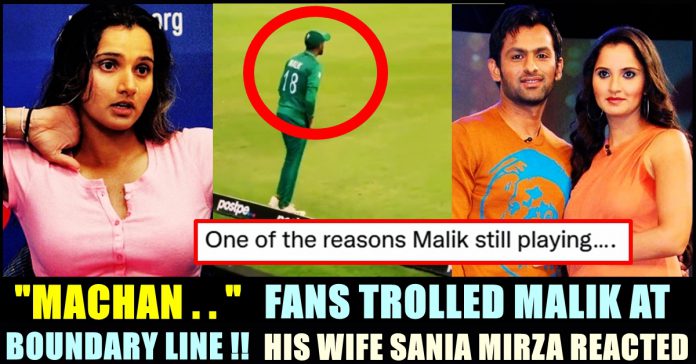 A video of crowd chanting “Jijaji” at Pakistan senior player Shoaib Malik who was fielding at the boundary line during the match between India and Pakistan went viral in social media platforms. Now, to our surprise, his wife and former Indian tennis player Sania Mirza reacted to the tweet by dropping laughing and heart emojis. “Jijaji” is a term used to mention sister’s brother or brother-in-law. This is not the first time the cricketer goes through such incident as a similar one happened during the Asia cup 2018.

The 39 year old Shaoib Malik who is still representing the national team of Pakistan cricket, played a vital role in his match against New Zealand. Chasing 134 runs, the team lost its openers unlike the first match against India. Using his experience, Malik scored a 20 balls 29 runs and helped his team to register their second victory in the ongoing T20 world cup tournament. The batsman didn’t get a chance to bat against India as openers of Pakistan chased down 151 runs comfortably.

However, he fielded while India was batting and received a loud chant “Jijaji” from a group of fans, presumably from India. As said “jijaji” is used to mention brother-in-law and the cricketer is being referred with the term since he married Indian tennis star Sania Mirza in the year 2010. The nine-seconds video clip is doing rounds ever since India-Pakistan match took place.

Virat footage of the moment shows the cricketer turning around to look at the fans chanting “jijaji”. The video garnered the attention of lakhs of online users, including Sania Mirza. The Tennis player added two laugh emojis and two heart emojis while sharing the video. Check out her tweet below :

Check out some of the reactions her post received :

Good one. Well played Shoaib and well played Pakistan. Deserving winners. He’s been around forever. 1999. Sania. And he hasn’t aged a bit. How he ran covering the boundaries in the match. Incredible.

That’s relationship we all cherish.After all we r one.

One of the reasons Malik still playing…. https://t.co/XVyuK3pegh

Really nice to look at the scene. The people,s perception between to countries each should change for the wellbeing of two countries. We should not live the violence long period of time. Negotiation is really beauty.

A similar incident happened in the Asia cup of 2018. While Shoaib Malik was fielding in the boundary line, Indian fans took the opportunity to call out to him saying, “jiju look here once”. Surprisingly, the Pakistan all rounder turned around and waved at them. Here’s the video :

Mahendra Singh Dhoni commonly known as MS Dhoni is an Indian international cricketer who captained the Indian national team in limited-overs formats from 2007 to 2016 and in Test...

Pugazh Opens About The Real Cash He Received From The LOL Show!!

Cooku With Comali fame Pugazh, in an interview with the reporters, was asked about the 25 lakhs he won in 'LOL: Enga Siri Paappom'....

Journalist Got Upset On Seeing This Recent Youtube Sketch Video Of “Parithabangal” !!

Youngsters involving themselves in entertaining the public through youtube platform by making sketches, spoofs, vlogs, cookery videos and other visual contents became a trend...