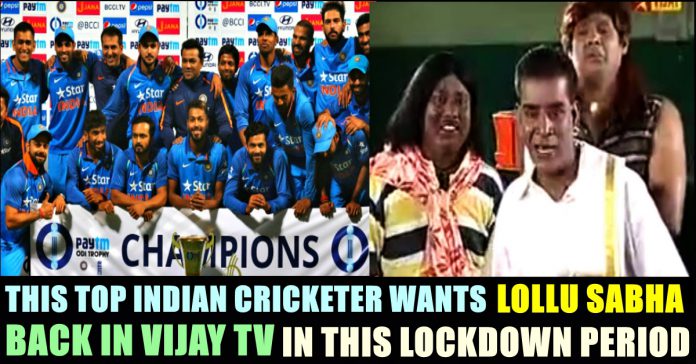 People are finding their own ways to spend their time during this lockdown period. We can see them cooking, exercising, Watching movies and series, interacting with their friends through video call to kill the time in the quarantine period. TV, Youtube channels are using this opportunity to grab audience. Sun TV decided to cancel all its serial schedule and announced that there will be two movies every day. Meanwhile, Ravichandran Ashwin, popular Indian cricketer and former Punjab captain expressed his wish if bringing back “Lollu Sabha”, a popular movie spoof show which telecasted during lat 2000s.

Lollu Sabha show which was telecasted in STAR Vijay, streamed during 2004-2007. Each episode of the series was a spoof of a Tamil feature film or television show. The show garnered excellent response from the Television watching audience. Comedy actor N. Santhanam, Swaminathan, Jeeva, Yogi Babu and Jangiri Madhumitha are widely considered as few of the best finds of the show which lasted 156 episodes.

The movie spoofed many blockbuster movies such as Padayappa, Pudhupettai, 7G Rainbow Colony etc. The episodes that are streamed in the television back then are now available in youtube platform which was till being watched by many people. To a twitter user who requested Vijay TV to stream Lollu Sabha back, Ashwin replied to him by saying “Totally agree.” with fire emojis.

“Dear Vijay Television, amidst the gloomy lockdown and the crisis of an uncertain future, I just have one request. Do entire TN a favour and bring back the legendary ‘Lollu Sabha’!” wrote the twitter user in his tweet :

Government announced shutdown to make people stay in indoors to avoid the deadly Coronavirus from spreading. Community spread is the dangerous threat to our society right now. Many cinema celebrities and famous personalities are also insisting the same on the public people.

Ashwin is very much known for voicing out for the social issues. The cricketer, to make people stay inside their house, changed his handle name from Ravichandran Ashwin to “Let’s stay indoors India”. Now, through his every activity in Twitter, Ravichandran Ashwin asks his followers to stay indoors. Comment your views on bringing back Lollu Sabha !!

Previous articleActress Sent Her Picture In Bra To This Random Online Guy !!
Next articleFollower Asked Why Julie Is Not Working As A Nurse Now !! Here’s How She Answered

Tv stars and known models are busy promoting products in their respective social media accounts amidst this ongoing lockdown crisis. Abhirami Venkatachalam who got...

Raid at Poes Garden: Mannargudi Mafia is in trouble?

Taxmen conducted a raid in former CM J. Jayalalitha’s residence at Poes Garden. This raid is said to be the continuation of the raid...

Fan Appreciated This Emerging Actress After Watching Her Movie In Mobile !! Check How She Reacted !!