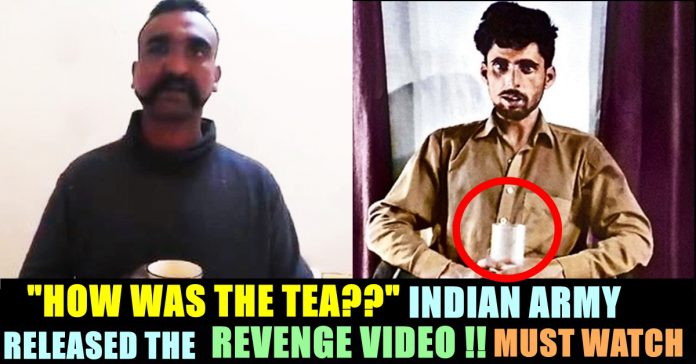 “That’s all I am supposed to tell you” is not just an ordinary phrase after the incident that happened to Abhinandan. The phrase is going to be celebrated for years and years by the people of India to show their courage. Those are the words repeatedly used by Wing Commander Abhinandan to the Army of Pakistan whom he referred as thorough gentlemen.

All that are revealed by Abhi is nothing but his name, religious and service number. He even said them where he is exactly from India and he never hesitated to say “No” while being in their custody.

Though, he never changed his words even after reaching India, people of Pakistan made fun of this incident. A cricket World Cup advertisement by a Pakistani channel featuring a spoof using Abhinandan Varthaman lookalike as a prop has not gone down well with Indian social media users, many of whom have termed the “mocking” act “cheap” and “shameful”.

Now in a way of getting revenge to it, the Indian Army has released a confession video of a terrorist. Indian Army has arrested two Pakistani nationals associated with Laskhar-e-Taiba who were trying to infiltrate into India through Jammu and Kashmir. Army officers addressed the media along with J&K Police on Wednesday morning and played confession videos of the two men.

The Army has said Pakistan is trying to disturb peace in the Valley. Chinar corps commander, Lieutenant General KJS Dhillon and J&K Police chief Munir Khan made the revelations at a joint media address on Wednesday in Srinagar.

The terrorist who got arrested are Mohammad Khaleel and Mohammad Najim. In the confession video of Mohammad Najim, he was seen holding a cup of tea and was seen revealing his identities. At one point he was asked “how is our tea?” to which the Pakistani terrorist replied by saying “Chai Bahut Achchi Lagi”

#WATCH SRINAGAR: Indian Army releases confession video of two Pakistani nationals, who are associated with Lashkar-e-Taiba, and were apprehended on August 21. #JammuAndKashmir pic.twitter.com/J57U3uPZBl

To The Telegraph, the army sources has said that it was did only to take revenge on the incident of wing commander Abhinandan Varthaman. The Army also said the two men were trying to carry out a recce to help a large group of Lashkar-e-Taiba terrorists to infiltrate the Valley.

“During questioning the two LeT guides revealed that their handlers across the LoC are planning to push in groups of terrorists to disrupt peace and launch attacks in Kashmir,” said the Army.

A large number of terrorists are waiting to infiltrate. Pakistan is trying every night to push in these men into our side, said Lt Gen DS Dhillon.

Previous articleFans Slammed Tharshan’s Girlfriend After Watching Yesterday’s Episode !! Check How She Shut Them Down !!
Next articleBIGG BOSS Viewers Dragged Sandy’s Wife & Criticized Her !! Here’s How She Handled Them !!

Vani Bhojan Opened For The First Time About Working In “Mahaan” Movie !!

Emerging actress Vani Bhojan, scenes of whom got completely chopped out from the recently released "Mahaan" movie, opened for the first time about what...