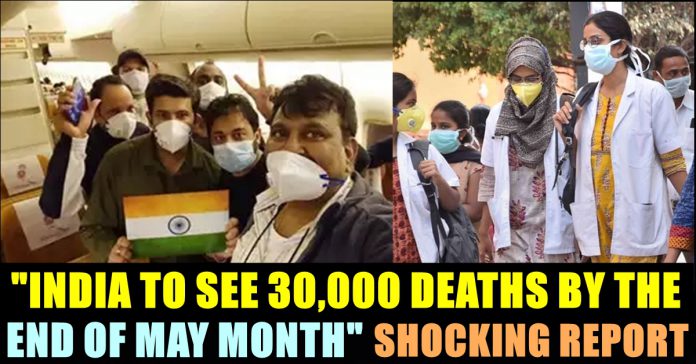 A recent report of The Print said that India could see 30,000 deaths by May month due to COVID 19. On 21st of March, India saw the largest single day spike in the number of Coronavirus cases which terrorized the citizens on imagining the coming weeks. The report said India is headed for a million number of confirmed cases and by the end of May nearly 30,000 possible deaths are going to occur.

India discovered its first 50 cases in 40 days and in five more days the number cases increased to 100 cases. It took three more days to reach 150 cases and just 2 days to reach 200 cases. It is predicted that the number going to increase faster in the coming days. The number of confirmed cases are doubling in India every 5 days whereas in USA, cases are doubling every two cases.

Italy found its first case 10 days after South Korea and saw only 10 cases in the next 20 days. But then in a span of just 1 week, the cases started to increase in vast number as it saw hundreds of them. India required to implement the social distancing which is considered as one of the important safety measures to avoid the situation faced by Italy.

At the current rate of growth in confirmed cases, and assuming the 3.4 percent fatality rate relative to confirmed cases calculated by the World Health Organization, India is headed for a million confirmed cases by the end of May and over 30,000 deaths. The reports says that these are conservative estimates. A team of biostatisticians used predictive modelling and estimated that the above mentioned number of deaths could occur earlier that is 15th of May which means that there will be more number of deaths by the end of the fifth month. Considering the absence of more widespread testing, Indian software entrepreneur Mayank Chabbara estimated over five million cases and more than 1.7 lakhs deaths by the end of May as there could be undiscovered cases as many as eight times of the actual numbers released by the government.

Many people who are still unaware of the seriousness are avoiding the safety measures implemented by the government. Government announced lockdowns till 31st of March to avoid community spread. The deadly virus killed more than 16,000 people across the world and more than two and half lakh confirmed cases has been reported across 186 countries around the world. World Health Organisation insists the people across the world to wash hands frequently and to stay home for few days to prevent it from spreading. They are also demanding people to wear safety masks while going out for emergencies. Tamilnadu government announced shut down for every places which requires public gatherings including Theatres, Malls, Amusement parks, Zoos.

Previous article“They Are Celebrating It Like Carnival” Kajal Agarwal & Khushboo Reacted !!
Next article“Virus Won’t Affect These Kind Of People” Says Man Who Got Recovered !!

In this recent promo of Tamil Bigg Boss, Kavin's friend Pradeep Antody entered the house on behalf of his family. In the promo he...