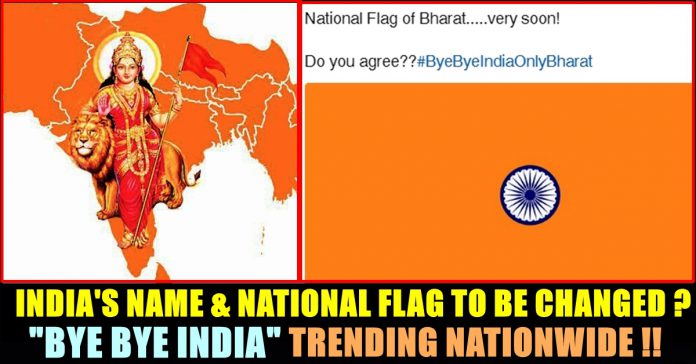 After Independence, the constituent assembly adopted two names, India and Bharat for the country. Many members wanted “Bharat” to be the primary name. A petition is in the Supreme court seeking to “drop” India from constitution and keep “Bharat” as the only name. As per reports, Supreme court is all set to hear the plea of amending the constituion on June 2.

When India got Independence from British rule, a furious debate took place in the constituent assembly regarding the name of the country. British called the country as “India”. Mughals, the biggest empire in India, called the same as “Hindustan”.

The constitution finally decided to adopt two names India and Bharat. Now, a petition has been filed by Namah, a resident of Delhi, in Supreme court seeking removal of “India” as the name of the country and keeping just Bharat as the solitary identity of the nation. He says that “India” is a symbol of slavery while seeking to recognise “Bharat” or “Hindustan” as the only name of the country.

As the hearing of this case in going to take place in Supreme court, Twitter users, especially those who wants to change the country name as “Bharat” started trending “Bye Bye India Only Bharat” in twitter. One of a twitter user went one step ahead and said that the color of our national flag is going to change soon into saffron. Check out some of the tweets under the hashtag below :

India say #ByeByeIndiaOnlyBharat we want only Bharat and Hindustan pic.twitter.com/yYWbrHVGJ4

Bharat is Original Name
Hindustan name was given by Muslim rulers
India name given by British.

Lets Back to our Original BHARAT !!#ByeByeIndiaOnlyBharat@ANI @BJP4India

Yes,Instead of INDIA it's good to see BHARAT written on our cricketers uniform .. #ByeByeIndiaOnlyBharat pic.twitter.com/4tuFGjgaOJ

We got freedom form British Rule in 1947.
Now it's time to get freedom from their name India. #ByeByeIndiaOnlyBharat pic.twitter.com/ogrCcPHx5D

'India' was a fancy name given by the British and the practice should be abolished soon.rb&17#ByeByeIndiaOnlyBharat pic.twitter.com/LiteESfvxS

Another set of twitter users who got irritated on seeing this hashtag trending nationwide, asked Supreme court to prioritize what is important. They asked the Supreme court to concentrate migrant crisis amidst this COVID pandemic. “Migrant workers – eyes shut, political prisoners – eyes shut. You are willing to hear the case on changing the name from India to Bharat?” an agitated Twitter user sarcastically asked on the micro-blogging site .

Supreme Court to hear plea striving to shift name from India to Bharat in Indian constituion.
While other valuable judgements are lined up for earshot.
Law students, Article 368 be like: pic.twitter.com/qdkucnV4Kg

#ByeByeIndiaOnlyBharat
Me realising my IQ drops down by 1 bar after seeing this hashtag pic.twitter.com/lWhU0ec0nj