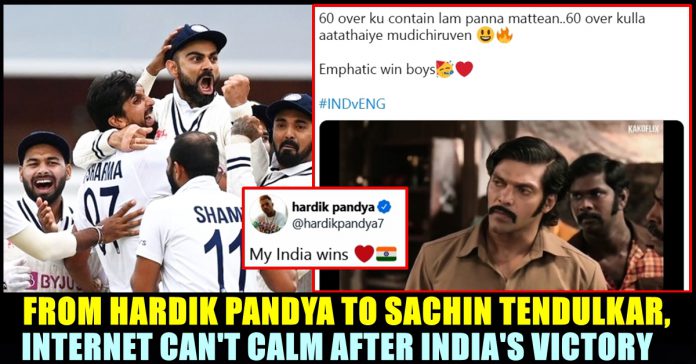 In the nail baiting fifth day of the second test that took place between India and England ended up with the visitors clinching the victory. Setting a target above 270, team India bowled out team England for mere 120 runs and registered history. Fans, celebrities and cricket lovers from across the country have been celebrating the win by lauding team India. Memes and reactions are also flooding the feed of the Internet to celebrate India’s victory.

Those who were following the match keenly, would say that earlier, at the start of the day, all three results were eminently possible. India had a lead of 154 runs in the second innings with 4 wickets in hand. Resuming on 181/6, India had Rishabh Pant (22) and Ishant (16) dismissed by Ollie Robinson in the opening half-hour and that brought Mohammed Shami and Jasprit Bumrah to the middle. Shami and Bumrah put up an unbeaten 89 runs for the ninth wicket to frustrate England, which had reduced India to 209/8 on what turned out to be fractious morning’s play.

A Lord's win for the ages.

Just how good was Mohammed Siraj?

Chasing 272, England were bowled out for 120 in 51.5 overs with skipper Joe Root top-scoring with 33. Siraj picked four wickets in the second innings which includes Buttler’s whereas Bumrah sent 3 batsmen of England away. With Ishanth picking 2 crucial wickets, Shami did his part by taking one wicket. As soon as the match ended in India’s favour, fans of team can’t keep calm which is evident through the posts that are surfacing in the social media platforms.

Check out Internet is reacting below :

My India wins ❤️🇮🇳
Well done to all
So proud
❤️@BCCI

To borrow a quote from @sachin_rt, "People throw stones, you turn them into milestones". This is a milestone victory, congratulations @imVkohli and Team India @BCCI 🇮🇳👏🏻 #ENGvIND pic.twitter.com/3i2HGzgPER

From survival to revival, the final day at Lord's was no less than a binge-worthy thriller.
Big win #TeamIndia 👏

This one's highlights are gonna be replayed many times in the future!#ENGvIND pic.twitter.com/aEqc0VJjGN

Me @KVijayKartik didn't move a bit for the last 15 overs. I guessed the last wicket right and the High five follows.👌😜

Virat won this by declaring at the right time. His live wire presence is always a gift for India. 💪🔥.

From At beginning of the day, “ bacha paayenge kya”,to registering this win at Lords, not many teams can turn around their fortunes in overseas Test Matches like we have done. Kamaal kar diya ladkon ne..
And as they say, Never ever ever ever underestimate the Indian’s #LordsTest pic.twitter.com/pLTz49AxUq

HISTORIC! What a gift on India’s #75thIndependenceDay A win for our #BoysInBlue over England at #Lords no less. SENSATIONAL! Please excuse me if I go a little mad for a day. All Indians are allowed. Thank you #TeamIndia love ya. #IndvsEng pic.twitter.com/lHRDrP49NO

That was some Test match #TeamIndia! 👏🏻🇮🇳

Enjoyed watching every moment of it. The resilience and grit that the team displayed in difficult situations is something that stood out for me.

Previous articleOnline User Talked Ill About Vaccine To This Actress !! Check How She Replied
Next articleAnantha Kannan, Most Loved Anchor Of 90s Kids Is No More !! Internet Mourns