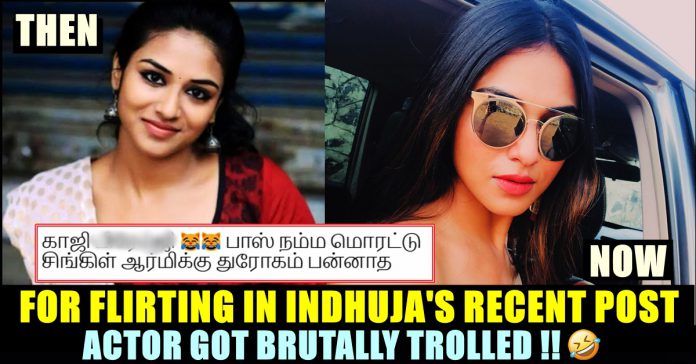 Aspiring heroines are making good use of this lockdown opportunity to build their portfolio by conducting photoshoots. Even top-tier actors such as Samantha, Vijay Sethupathi are participating in photoshoots occasionally to build their profile. It helped many forgotten actors to make their re-entry into film industry as well. Some of the best examples in recent times are Ramya Pandiyan and Divya Duraisami who became internet sensation through their simple photoshoots in their terrace.

Viswasam actress Anikha Surendran, TV serial fame Shivani Narayanan, Bigg Boss sensation Julie, Losliya are some of the other aspiring heroines who are actively participating in photoshoots to gain film opportunities and to get their face recognised among the fans. Now, actress Indhuja Ravichandran who debuted through “Meyadha Man” joined the list and impressed her followers in big time.

The actress who was seen in “girl next door” roles in the film she acted, now came up with a couple of pictures in which she can bee seen wearing uber cool attire with her shades on. This transformation from the actress made her followers go gaga. “Wear your shades and pose 😎” she wrote as the caption for the post.

Check out out below :

Wear your shades and pose 😎

This changeover from her which no one saw coming, made her “Bigil” co-actor Varsha Bollamma and Rebha John to write “Enna Simran idhellam???? 😂 You hottie!! 😘♥️”, “Who is this omgggggg!!!! Hollywood heroine you are” respectively. Her “Maghamuni” co-star Mahima Nambiyar also stunned on seeing the post.

Though the actress took it lightly and replied to him with a laughing emoji,

other followers of the “Mankatha” actor trolled him for publicly flirting with her. They warned him not to forget that he is a “Morattu Single”. Check out some of their reactions below :

41 year old Premgi who is yet to get married, is one of the most eligible bachelor of Kollywood film industry along with Vishal, Simbu, Jai and others. One the work front, Indhuja who was last seen in Vijay’s sports drama “Bigil” as one of a player, is expected to be seen in “Khaki”, “Netrikann”, “Mookuthi Ammam” post lockdown. Premji who composed music for his brother’s directorial “Party”, is expected to sign films as actor post lockdown.

Previous article“They Treated Us Like Terrorists” -MS Dhoni On The Biggest Turning Point Of His Life
Next articleStudents Who Didn’t Pay Exam Fees Seeking Government’s Help !!