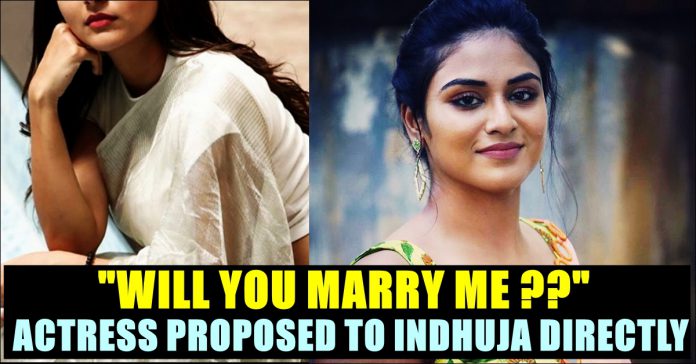 Indhuja Ravichandran, known by her stage name Indhuja, is an actress who appears in Tamil films. Her recent outing Bigil in which she played the role of one of a key football player in Tamilnadu state team, is being widely appreciated by the audience.

The character of “Veambu” she played attracted large number of audience as it had actor Vijay in the lead role. Apart from acting in movies, Indhuja is known for her social media appearance. The photos she shares in her Instagram accounts would go viral as the actress carries an elegant look in the photographs.

Now the actress has posted a picture of herself in her official Instagram account. In the pictures she looked so beautiful in her outfit as it reached 1 lakh likes from her followers. Check out her post below :

On seeing these pictures, actress Mahima Nambiyar who played the role of female lead in Arya’s Maha Muni, has replied with a marriage proposal to the surprise of the Instagram users. To this comment of Mahima, Indhuja immediately replied with an acceptance.

Mahima Nambiar after Saattai, she took a year’s sabbatical to complete her school, and returned to acting with roles in four Tamil films. Her next release was Ennamo Nadakkudhu in which she appeared as a nurse named Madhu. Her future projects include Mosakutty, directed by Jeevan, Puravi 150cc, directed by Cheran’s associate Venkat, and Ahathinai, directed by Marudhu. She has been signed to play a dual role in Samuthirakani’s Kitna. She was last seen in critically acclaimed “Maha Muni” in which she played role of a rebel.

What do you think on this conversation between Indhuja and Mahima ?? Comment your views !!

“They Offered Me 2 Crores”- Suchi

Suchi who was in limelight few years back for all the wrong reasons, is now being lauded by the users of Internet for raising...

Tamil nadu Chief minister MK Stalin came up with a series of tweets, reacting to the speech of Rahul Gandhi in the Parliament about...