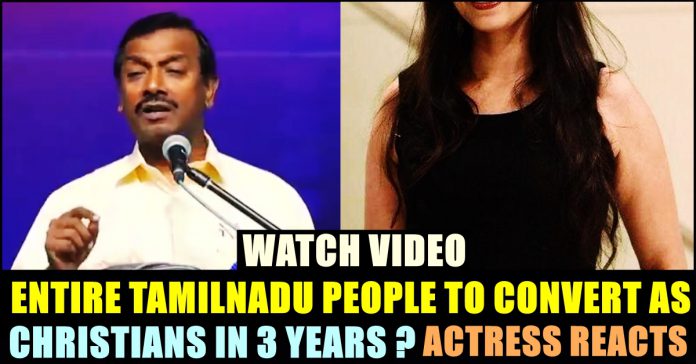 India is a land of diversities as we can visibly see it in the spheres of religion. The major religions of India are Hinduism, Islam , Sikhism, Christianity, Buddhism, Jainism, Zoroastrianism, and Judaism. India is a land where people of different religions and cultures live in harmony. This harmony is seen in the celebration of festivals. The message of love and brotherhood is expressed by all the religions and cultures of India.

Due to diversity in religions India faced some social tensions as well. The recent implementation of CAA act by the central government is one of a major example for us to realize that the different kind of religions are also causing trouble to the citizens. Examples can also be depicted as communal violence based on religion values or current issue of tensions among people of different states and of different linguistic origin.

Now a recent video of a popular priest Mohan C Lazarus has raised the eyebrows of the netizens as he can be seen giving ideas to the people who has belief in Christianity on converting the entire people of Tamilnadu as christians. Mohan C Lazarus is known for his religious speeches in then events he conducts.

“I was told that there are 38,000 churches with 60 lakh believers in tamilnadu. In this year of 2020, if one believer converts at least one person as christian, next year there will be 1 crore and 20,000 believers. Likewise we can convert the entire people of Tamilnadu by the end of next three years. ” he motivated the people who attended his event.

On seeing this video in Twitter, Actress Kasthuri who is known for her outspoken attitude in social media, has shared the video by typing “Wtf!” as caption.

Dance choreographer Sathish who rose to fame through acting in “Achcham Enbathu Madamayada” also reacted to the post by adding two emojis. Here’s his tweet :

Kasthuri a famous actress in Tamil cinema, known for films like Indian, Tamizh Padam etc. She recently participated in Tamil Bigg Boss show as wild card contestant and got evicted in the first week she got nominated. She began her acting career in 1991 in Kollywood and has been subsequently associated with Tamil films. Prior to acting, she has been a model.

Not only for her film appearances, Kasthuri is also known for her existence in social media platforms. She never shied away to post her opinions on political happenings. Her controversial tweets and verbal spat with the followers, often grabbed the headlines.

Comment your vies on this video shared by Kasthuri !!

Previous articleCORONAVIRUS Effect : Man Killed Himself Due To Miscommunication !!
Next articleTamilnadu Police Creating Awareness Through Ajithkumar !!

“Concentrate On Your Batting” Fan After Seeing Warner’s Recent Post !! Check His Reply

After finishing day three of the test match between Australia and India, Australia's star opener David Warner came up with an Instagram post recreating...