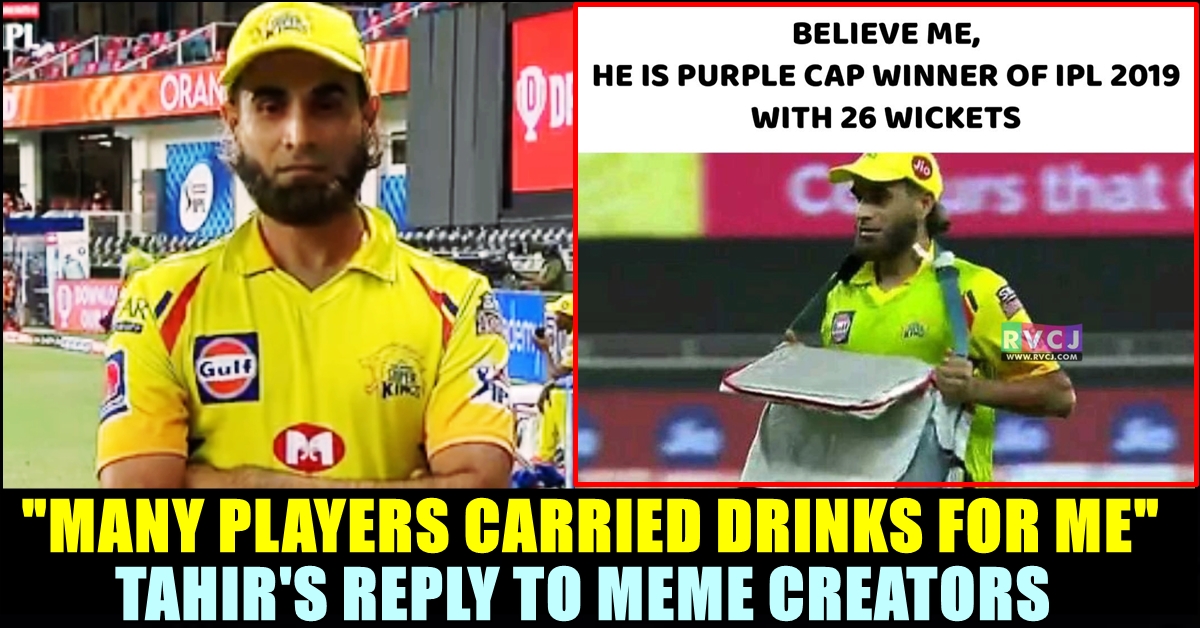 Imran Tahir, a promising leg spinner of Team South africa is representing Chennai Super Kings in the IPL tournament for the past three years. He who won the purple cap by taking 26 wickets in the last season, is yet to play his first match in the ongoing season of IPL. Meanwhile, fans who witnessed him carrying drinks during the matches of CSK, started sharing memes showing their concern over the talented spinner. Now, he came up with a tweet saying that it doesn’t matter as his ultimate goal is team’s victory.

“He will definitely come into the picture as we go ahead. Right now, with the conditions on offer, the team composition has been planned with two foreigners at the top as pure batsmen and then two pace bowling all-rounders. But he will come in with the wickets starting to take turn in the second half. You have the 4-foreigner restriction so you always plan according to the conditions on offer,” said Kasi Viswanathan, CEO of Chennai Super Kings team.

While talking to the commentators during the match between CSK vs SRH, Tahir said “It has been difficult sitting out, but I have to be honest, I am enjoying and I know how we go about it as a team. I am happy if we are doing well and waiting for my opportunity and hopefully will be ready when I get it. Will be a good challenge playing against the young Indian talent. I see the pitches have started spinning a little bit,”

Now, fans who have been watching his performance for the past years, came up with memes and post supporting the 41 year old cricketer.

Imran Tahir hasn't featured in any CSK game so far in IPL 2020 💔 pic.twitter.com/6IVA6udlrF

Now, reacting to these memes, Imran Tahir came up with a tweet writing “When I used to play many players carried drinks for me now when deserved players are in the field it’s my duty do return favors.Its not about me playing or not it’s about my team winning.If I get a chance I will do my best but for me team is important”

When I used to play many players carried drinks for me now when deserved players are in the field it’s my duty do return favors.Its not about me playing or not it’s about my team winning.If I get a chance I will do my best but for me team is important #yellove @ChennaiIPL

This attitude of the cricketer is being lauded by the fans of the CSK team. “What. A. Man. Cheers to the attitude!” wrote Chennai Super Kings on seeing the tweet of Tahir.

In social media, Tahir is known for the Tamil tweets he is posting in his official twitter account with the help of Prasanna during IPL season. Now, this sensible tweet from him is expected to gain him more followers. Comment your views on this tweet from Tahir !!