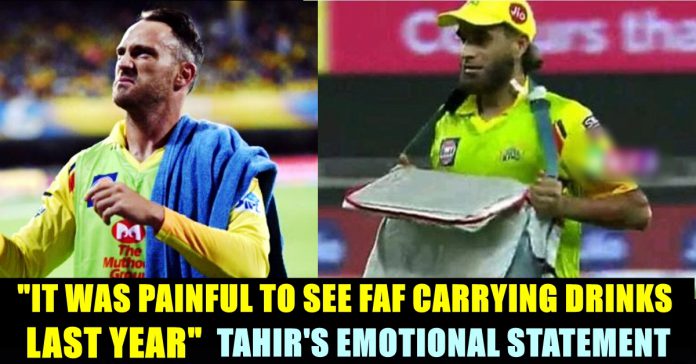 With just 4 matches to go in this ongoing IPL tournament, Imran Tahir, the purple cap winner of last season is yet to play a match for Team Chennai Super Kings. When fans worried on seeing him carrying drinks, Tahir bhai came up with a tweet consoling them. He said that his team’s performance in the tournament matters for him more than anything else.

“When I used to play many players carried drinks for me now when deserved players are in the field it’s my duty do return favors.Its not about me playing or not it’s about my team winning.If I get a chance I will do my best but for me team is important” he said in his tweet.

When I used to play many players carried drinks for me now when deserved players are in the field it’s my duty do return favors.Its not about me playing or not it’s about my team winning.If I get a chance I will do my best but for me team is important #yellove @ChennaiIPL

Now, while talking with Ashwin for his youtube channel, Tahir revealed that he can feel what Faf du plessis went through last season, despite of his decent t20 batting average. “Last year Faf du plessis carried drinks, I think for the whole season. It was quite painful because he is a fantastic player with a brilliant t20 average. This year I am doing the same. I actually got an idea how he felt last year. I have been talking to him as well.” said Imran Tahir to Ravichandran Ashwin.

“I am sure you know the culture of Chennai Super kings . Once they have their overseas four and they are settled, it is very hard for the fifth guy to come in. I hope I get a game” he added.

Watch the video below from 19th minute :

Imran Tahir who played for 40 plus teams in his entire career, said that Chennai Super kings is his favourite franchise. He said that the way they care for the players and their families impressed him a lot.

Imran Tahir, a promising leg spinner of Team South africa is representing Chennai Super Kings in the IPL tournament for the past three years. He who won the purple cap by taking 26 wickets in the last season, is yet to play his first match in the ongoing season of IPL. Meanwhile, fans who witnessed him carrying drinks during the matches of CSK, started sharing memes showing their concern over the talented spinner.

While talking to the commentators during the match between CSK vs SRH, Tahir said “It has been difficult sitting out, but I have to be honest, I am enjoying and I know how we go about it as a team. I am happy if we are doing well and waiting for my opportunity and hopefully will be ready when I get it. Will be a good challenge playing against the young Indian talent. I see the pitches have started spinning a little bit,”