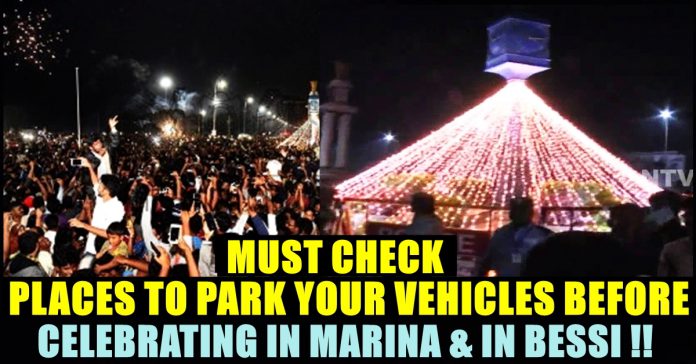 Chennai Beaches are the constant destination for the residents of the city on New year night. Whole lot of people who are unknown to each other would gather at Marina and Elliots beach only to scream “Happy New Year” on the 12 : 00 AM of 1st January. As the celebration involves vast number of people, there are many chances for unpleasant things to occur as well. To prevent people from getting suffered, Chennai city police came up with an announcement which includes the places where people should park their vehicles during the new year celebration in beaches.

Between Gandhi Statue and the War Memorial, Vehicles will not be allowed in Kamarajar Salai from Tuesday 8 PM to Wednesday 4 AM which is on january first of 2020. To reach Anna Salai, Vehicles from Wallajah point and RBI North Subway towards War memorial will be diverted towards Flagstaff road.

Vehicles from Adyar towards Gandhi Statue will be diverted at Santhome towards Kutchery road, Luz, Royapettah High Road and Music Academy to reach Anna Salai. Vehicles from Karneeshwar Koil street will not allowed towards Kamarajar Salai and will be allowed only towards Santhome.

Vehicles towards loop road from Srinivasapuram will not be allowed. The announcement from city police also informs the citizens about where to park their vehicle before celebrating New year in Chennai beaches. To park near Marina, people can choose any one of the below mentioned locations. Swamy Sivananda Salai-one side, Railway Basement at MRTS Chepauk, Lloyds Road-one side, Queen Mary’s college campus and in one side of Dr.Besant road.

Let us pray for a safe celebration to enter a new decade !!

Previous articleDale Steyn’s Reply To Indian Fan Made Others Happy !!
Next articleChinmayi Gives Back To A Man Who Made Vulgar Comment !!