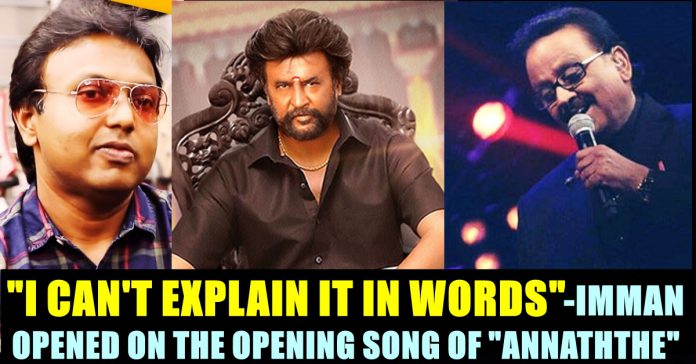 A.R Rahman, Yuvan Shankar Raja, G.V Prakash, Anirudh Ravichander, Harris Jayaraj, Devi Sri Prasad, Thaman, Vijay Antony and all the other music composers of Indian film industry has expressed their emotions over the demise of legendary singer SPB. Oscar winner Rahman posted a video of a song sung by the legendary singer and expressed his grief whereas other musicians came up with heartfelt condolences to the 74 year old.

D. Imman while uploading his condolence has made it clear that the last song of SPB is going to be his composition and the legend has completed his singing career by singing the opening song for Superstar Rajinikanth. “He has been a support to our several nights. I got the opportunity to work with him in both small screen and silver screen” said D. Imman.

“In Jilla movie, he sung “Paatu onnu” song for me along with Shankar Mahadevan sir. After that he has sung for the opening song of upcoming “Annaththe” film.” Imman confirmed. “I feel so blessed on recalling that his final song was composed by me. I don’t have words to explain my emotions. He is such a lovely person and a splendid human being. There is no replacement for him. We really miss you SPB sir. Love you” he said.

Apart from Imman, all the top musicians of film industry paid condolences with their tweets. Check out them below :

Music will miss you #SPBalasubramaniam

Your voice will stay on … there is no end to it sir … #ripspb pic.twitter.com/LKAWQoQsTP

Oh, God! My heart is broken to pieces along with crores of music lovers hearing his demise. But, I may get back only by the songs he left for us. My condolences to families, Friends of #SPBalasubrahmanyam Garu. @KTVTAMIL @SunTV @sunnewstamil @Tv_thanthi @news18dotcom pic.twitter.com/KQQiSr1HJN

The voice of the nation is no more.. deeply saddened.. unforgettable and precious memories in the studio with you.. will miss you and your love sir..#RIPSPBalaSubramanyam pic.twitter.com/iPCQEugNKs

Havent slept in d last 24hrs hoping & praying some Miracle wud happen..but dfntly not to listen to this devastating news:((

We r so Unlucky dat,due to this time,we cudnt giv a NATIONAL FAREWELL 2 d LEGEND🙏🏻🎶

An angel sent from the heavens to give us musical happiness for eternity. Thank you sir. Rest in peace 🙏🙏🙏#SPBalasubrahmanyam

Deeply saddened and affected by this tragedy.. My heartfelt condolences. RIP #SPBalasubrahmanyam Sir

“Annaththe” film crew are waiting for the lockdown to end to complete the shooting of it. The film which was initially planned for 2021 Pongal release might get postponed due to the COVID 19. Let us wait for the COVID 19 ton end to celebrate the final song of SPB in theatres !!