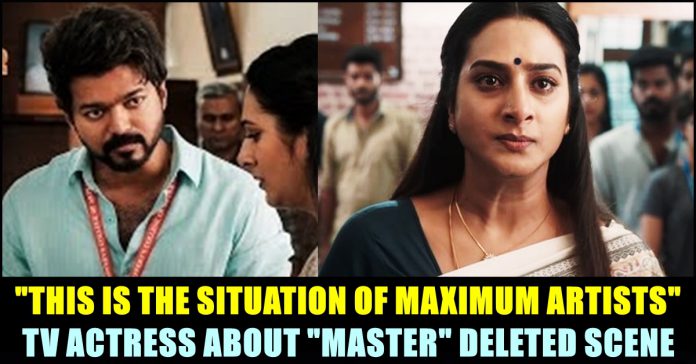 TV actress Anandhi who is known for debuting in popular Tamil serial “Kanaa Kaanum Kalangal”, went on to act in a number of Tamil films such as “Meegaman”, “Tharai Thappattai” etc. Known for her dancing skills, Ananthi got married in the year 2017 and is leading a happy life with her husband which is evident through her social media posts. She who is pretty much active in Instagram, recently uploaded a post mentioning about how supporting artists are getting suffered due to the decision being made by the makers on deleting their scenes from the films they acted.

A deleted scene from the Vijay-Vijay Sethupathi starrer got released in the official youtube channel of Amazon Prime on Saturday evening. The scene shows JD seeking justice for Savitha who got harassed by two of her male college mates on her birthday. As soon as the video got surfaced in the internet, many fans got disappointed on the fact that they couldn’t witness such a good scene in big screen.

The scene shows Vijay taking class on “Decision Making” to his students. A girl who interrupts the class, says that Parents of Savitha and the accused are getting compromised in the principal room. JD who accompanies Savitha to the principal room, beats the students who physically harassed her and makes them confess their crime.

Watch the film below :

He also gives a piece of his mind to his colleagues on good touch, bad touch, sex education, parenting and on how not to restrict girls and their clothing. The scene ends with the mother of the accused seeking Police help to arrest her son for the crime he committed. Now, uploading the screen shot of the mother character played by actress Surekha, Ananthi, through her post said that this is the situation of maximum artists, including her.

“Imagine Giving call sheet and acting in one of the important portions of the story and finally you see yourself in deleted scene. PAIN” read the picture she added which contained the screenshot of Surekha. Adding the picture, Anandhi wrote “When we will be eagerly waiting for the release of film ✨💫💫⚡⚡and finally . This is the situation which maximum artists faces. including me 🌟🌟🌟 deleted scenes 😔😔😔😔😞😞😞” her caption read.

However, actress Surekha, through her twitter account, thanked actor Vijay and Lokesh Kanagaraj for giving her the opportunity of acting in the film. “This scene was trimmed from the Movie, finally released by
@PrimeVideoIN,Thank you Team Master for this opportunity, Thanks Lokesh Gaaru, Immense Pleasure to act With Superstar Vijay Gaaru” she wrote in her tweet and it garnered 8k plus likes so far.