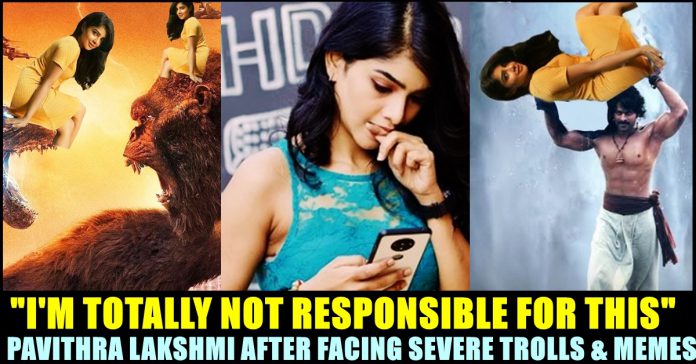 “Cooku with Comali” fame Pavithra Lakshmi opened on a post that was uploaded by a parody Twitter account of herself and reacted to the memes and trolls it caused. The aspiring actress who earlier cleared air on a fake twitter profile which received reply from actress Samantha, now, once again forced to give clarification through her verified Instagram account after seeing the memes and trolls caused by the post’s caption.

The Fake account which enjoys 44k plus followers in Twitter, uploaded a picture of Pavithra Lakshmi and added a caption saying “Take me Up” with happy emojis.

In no time, the tweet blew up among the users of the micro blogging social media site. Memes morphing Pavithra’s picture with many famous scenes, events flooded the comment section of the post. A user morphed the picture of the model with “Bahubali” Prabhas as the caption said “Take me up” whereas many placed the actress’s picture at top spots.

On seeing these many morphs, Pavithra, in her official Instagram account, issued a clarification saying that it is not her official twitter account and confirmed that the caption was not written by her. “I have been laughing my stomach out since morning, seeing all the memes. My mind voice be like, naan podatha caption ku enna yenda troll panringa. Deivame that’s a fake caption from a fake account. I am paavam. But these memes though” her story read.

Being a model, Pavithra is also a professional dancer and has worked with many prominent choreographers such as Prabhu Deva and others. She is currently enjoying 1 million followers in Instagram after uploading 300 plus posts and is also involved in endorsing products. She recently got committed as a heroine in a film producer by AGS production. Comedy actor Sathish is going to play the male lead in the film.

Previous articleRahul Gandhi Plays A Major Role In Winning Votes For BJP ??
Next article“I Know What Is Best For My Baby” – Sameera Sherif Replies To Harsh Comments

Mersal released on Diwali 2017 and became a blockbuster even though it was embroiled in several controversies. In Tamil Nadu itself, the film had...