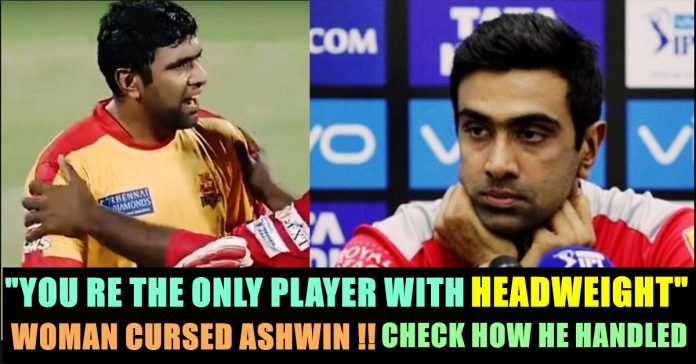 Ashwin, who made the headlines after ‘Mankading’ Jos Buttler in the Indian Premier League (IPL) 2019 match between Kings XI Punjab and Rajasthan Royals, Yesterday suggested Pakistan make about 350 runs and then run-out 10 batsmen at the non-striker’s end. The very day, Ashwin gave a fitting reply to a woman who cursed his cricketing career. To his Instagram post of his selfie post which captioned as “Roads ahead are always challenging. For now, the prospect of driving is so exciting🤩#ukdiaries #travel” The woman named as “Mariyam” commented by saying “You are the only player who has head weight.. I am so happy you are out of the Indian team now.”

Roads ahead are always challenging. For now, the prospect of driving is so exciting🤩#ukdiaries #travel

Here’s the reply that was made by the Chennai based spinner : On seeing this, one of the Insta user defended the cricketer by saying that the girl has no idea about what she is talking.

To this comment Ashwin replied by stating “sometimes u can have opinions watching people from afar, so it can happen.. Watching on Tele and reality could be so different.☺️”

Ashwin’s “Mankad” incident during the IPL tournament earned him many haters inside his own country. He also had a little bit of banter with Kohli, the captain of Indian cricket team. “I actually didn’t load and he (Buttler) left the crease. That’s always been my take on it because it’s my half of the crease. I was not even at the crease, he wasn’t even looking at me and he just left the place,” Ashwin said on the day of the incident happened.

Ashwin plays for Tamil Nadu in domestic cricket and captains Kings XI Punjab in the Indian Premier League. He is the fastest Indian bowler (also in some records the fastest in the world) to reach the 50-, 100-, 150-, 200-, 250- and 300-wicket mark in Test cricket. In 2016, he became the third Indian to win the ICC Cricketer of the Year award.

Mumbai Indians (MI) completed a hat-trick of wins over Chennai Super Kings in the ongoing Indian Premier League (IPL) 2019 as they became the...

A report on "Bigil" facing 20 crore loss has been doing rounds in the social media platforms for past two days. Bigil released on...

A picture of Chief minister MK Stalin's grandson and son of Chepauk MLA Udhayanithi Stalin, Inbanithi Stalin who is also known as Inban...