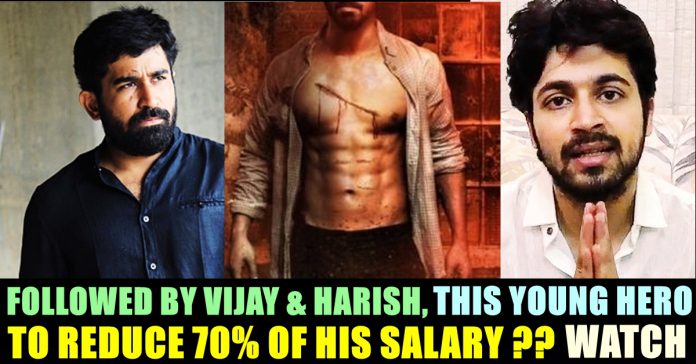 Followed by Vijay Antony and Harish Kalyan who announced 25 % of salary cut considering the lockdown crisis, now a young hero came up with a massive announcement about his salary reduction. As lockdown got extended for third consecutive time in India due to coronavirus which killed more than two lakh and eighty thousand people across the world, many industries finding ways to be productive for survival. Daily labours, Industrialists, Entrepreneurs and people working in almost every field are suffering financially due to the Corona outbreak. Tamil Film industry is no exception as production of all the movies got interrupted.

Now, actor Mahat Raghavendra who is known for acting in films like Ajith’s Mankatha, Vijay’s Jilla came up with a video statement announcing about his salary reduction. “I have been working in this industry for past 10 years. Did few films and just got opportunity to act as a protagonist in two films. I wish to work in many more films in future.” he said in his video.

“Due to this Corona lockdown, many workers of Tamil film industry got affected. Mainly producers who are funding for our films, Distributors who are buying our films and Theatre owners who are releasing our films are affected in big time. If authorities of these three departments releases an official report demanding a percentage of salary reduction for actors, I am ready to reduce it as per their wish. Be it 20% or 50% or 70%, I am ready to reduce it. Young actors like me would accept to it is what I believe. Beyond salary, a real actor would always prefer more kind of characters and find ways to entertain his audience. Thank you” he added.

Considering the loss incurred by Coronavirus, Vijay Antony has decided to reduce 25% of his salary for all the three films which is Rs. 1 crore for each film according to a popular cinema tracker Kaushik. By doing this, Vijay Antony believes that he could help his producers for a smooth release once the lockdown is lifted.

Actor Arul Doss who is known for acting in films like Soodhu Kavvum, Thirudan police said that he won’t be getting any salary from producers till December month due to Corona lockdown. Comment your views on these announcements from the people of Film industry !!