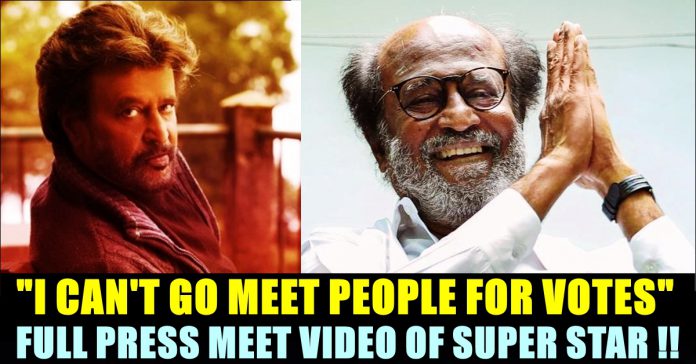 In his press meet, Superstar Rajinikanth has made it clear that he will be contesting in the upcoming Tamil nadu assembly elections. Earlier, he posted a tweet confirming the same. He who said that he will announce about the launch of his party soon, has made it public that his party will be launched on January month and the date will be announced on 31st of December. “Let’s Change Everything, If not now, then it will never happen” are the hashtags he used to make the biggest announcement about his political stint.

The Superstar actor had said that he will win the upcoming election with the immense support of the public and would maintain a politics that is honest, transparent, corruption less and secular. “Miracle and wonder will must happen” he said.

In the press meet, Rajinikanth reminded people about his statement on December 31, 2017. Further he reminded them about his speech during March month about his political entry. “At that time I was planning to make a statewide tour. But due to this COVID 19 pandemic, I couldn’t make it. You people know about the surgery I went through.” said Rajinikanth who explained about the practical difficulties in himself meeting people ahead of election.

“The kidney transplant operation have reduced my immune power. Doctors have advised me not to do meet public due to this condition. When I got sick and admitted in Singapore, only because of Tamil people’s prayer, I got recovered. Now I will feel extremely happy if I die for Tamil people. I will always stand by my words. A political change is necessary right now. The result of my political entry belongs to the people of Tamil nadu” he said in the press meet.

Watch the press meet below :

During March, Rajinikanth said that he will select an appropriate candidate to be as Chief minister and will lead his party as party leader alone. Rajinikanth displayed his political entry speech to reiterate his statement on not being a CM-aspirer. “It was not in my blood. I can’t think of being a Chief minister at all. You all know the incident that happened in 1996 where many influential people asked me to contest as CM. That is not in my mind at all. I will remain as party leader” he said.

SJ Surya has finally opened on a rumour about his relationship with actress Priya Bhavani Shankar which has been doing rounds in social media...

Liquor shops across the state continues to remain closed due to the extension of lockdown which was announced by our honourable Prime minister on...