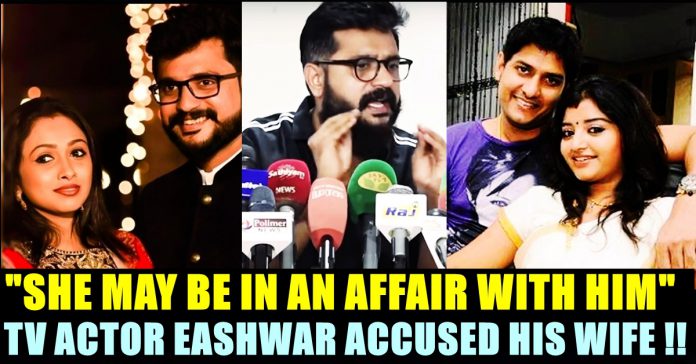 Eashwar Ragunath who was accused by TV actress Jayashree for domestic violence has appeared in front of press for the first time after the accusation against him. Eashwar who is also a serial actor says that he got released from Puzhal on the morning of December 4 and answered the questions of the press reporters.

Actress Jayashree who initially rose to fame through winning the first season of dance reality show Maanada Mayilada along with dancer Sathish is deeply depressed due to her husband’s activities it seems. She is also known for her acting stints in Tamil TV serials. Now the actress is reporting against her husband for involving in domestic violence against her and for having illegal affair with his co-artist Mahalakshmi.

Now, in a way of replying to her, Eashwar, in the press meet says that none of her accusation was true. The actor says that he never had a illegal affair with Mahalakshmi at all. “I married her only because of the child in 2016. If I misbehaved with our daughter why she didn’t make a complaint about it earlier ?? The child still calls me as “Appa” and I know how much she loves me. I still take care of her school fees” said Eashwar in the interview.

Watch the video of his press meet here :

At one point, Eashwar said that Jayashree might be having an affair with the husband of Mahalakshmi. He says that it would instigated her to make all these complaints against him. When one of a reporter questioned him about the confession of the child, Eashwar asked everyone not to talk about the child in a public press meet. “I request all you media not to talk about the child and this issue is only between me and Jayashree. She (Jayashree) must be a nutcase to bring the daughter to a public interview without caring about her future” he said in the press meet.

“He was asking me divorce since July end and Mahalakshmi was asking divorce from her husband since August. Son of Mahalakshmi is calling him as father and my daughter who saw it didn’t talk to him since then. I have recorded the entire incident as an evidence” said Jayashree who went on to reveal shocking behaviour of her husband. “When I am in the kitchen, he misbehaved with our daughter which I couldn’t tolerate at all.” said Jayashree. “He got drunk and pissed on her” she added pointing at her daughter who was sitting beside her in the interview.

Previous articleFemale Celebrity Shared Screenshots Of Obscene Texts Sent By A Guy !!
Next articleThese Celebrities Reacted To The Decision Of Telangana Police !!

There has been a new twist in the case of Dhashvanth,  the alleged accused in the murder case of Hasini,  the 7 year old...

Instagram account of PUBG Madan aka "Toxic" Madan is being controlled by the Police officials of Tamil nadu. They have been uploading posts creating...

The police today put charges against a man who was killed in an accident for rash and negligent driving in Himachal Pradesh's Chamba district,...

“I Would Have Raped Mammooty, If I Was A Girl” Says Mysskin On Public Stage !! Watch Video !!

Director Mysskin's rape joke at the audio launch of Peranbu in Chennai on Sunday, comes as a new low, even as film industries across the world...