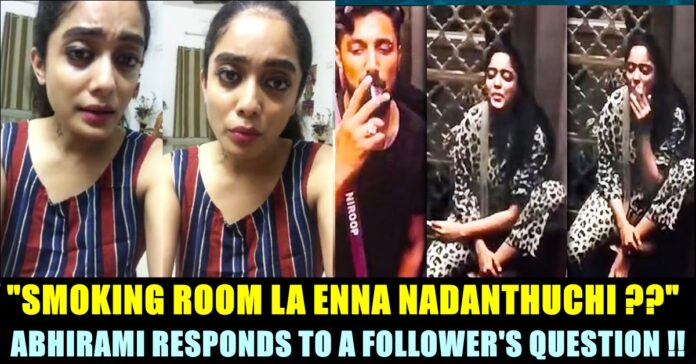 Abhirami of Bigg Boss fame responded to a question based on “smoking room” during her Instagram live session, saying that she’s not a fool and has common sense about how many people are watching the show. The emerging actress made the clarification as rumours were doing rounds on Balaji Murugadoss inappropriately touching her inside the smoking room. Abhirami, while replying, said that nothing happened as they think and asked them to “chill”.

Abhirami Venkatacham who is known among main stream audience for appearing in Ajith Kumar’s “Nerkonda Parvai”, appeared in the third season of Bigg Boss show hosted by Kamal Haasan. Followed by that, she went on to participate in the ultimate version of the show which got telecasted in Disney Plus Hotstar. Unlike Bigg Boss main, the ultimate version got access to the smoking room and also didn’t censor some of the cuss words uttered by the participants as the show was exclusively made for adults.

Niroop Nandakumar, in one of the episodes, claimed that Balaji Murugadoss touched Abhirami’s hip in front of him and it made him lose his mind. However, Balaji Murugadoss, in reply, clarified that he didn’t touch her with any wrong intention but it happened accidentally. Videos of both the former Bigg Boss main season’s contestants did rounds in social media platforms.

Now, after the show got ended with Balaji winning the title, fans questioned Abhirami what really happened inside the smoking room. . “Balaji know that I was inside. He touched Abhirami’s hip and she turned right away. Balaji know what happened between us. I don’t care what they do outside. That’s not my problem. He is not a third person as well. He did it being my friend and it angered me a lot” Niroop, Abhirami’s ex-boyfriend said to Vanitha during one episode.

Balaji, in a way of clarifying about the same, said that Abhirami is elder than him and he kept mum about the issue just because he didn’t want to ruin Abhirami’s future. “I was keeping my hand at a place and she came and stood in a place near me. She laid in my hand accidentally and I removed my hand immediately.  Niroop tol Abhinay that I pinched Abhirami’s hip” said Balaji to Thamarai.

“I got literally angry and asked Bigg Boss to show that video to public if there’s any” said Balaji to Thamarai in order to deny the accusation of Niroop completely.

Now, putting full stop to all the speculations, Abhriami, in a live interaction with her followers, said “Nothing happened between me and Bala. After I came out of house, I saw lot of funny things happening. I wanted to address this because unwanted imaginations are doing rounds”  in the live.

“I’m not a fool. It’s a show that is being watched by a lot of people and everyone will have minimum knowledge about it. Nothing happened, so chill and I’m a person who is known for my outspoken nature. I openly said that I like someone in a national television which denotes that I have no fear for anything. So chill” she further said.

Previous article“I Refused To Do Liplock In That Film” – Vijay Sethupathi Opened For The First Time
Next articleFans Trolled Telugu Superstar Chiranjeevi After Seeing This Video!!

For past few days, an allegation against A.R Rahman saying that he is a religiously obsessed musician has been doing rounds in social media...