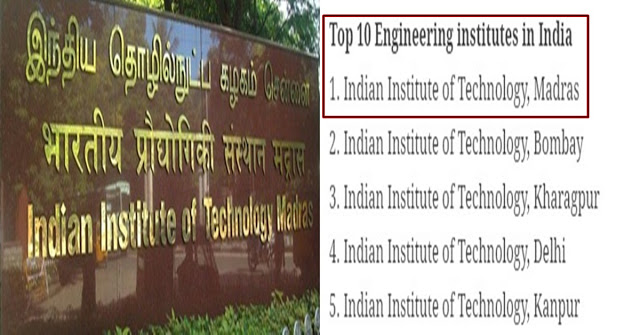 The ‘India Rankings 2016’ was released by Union Human Resource Development Minister Smriti Irani on Monday at Vigyan Bhawan. This first-of-its-kind indigenous ranking framework for higher education institutions has come out with a list of top 100 universities and institutes in Engineering, Management and Pharmacy .

As per the National Institutional Ranking Framework (NIRF), IIT Madras has bagged the top engineering college slot followed by IIT Mumbai and IIT Kharagpur. Top management institution is IIM Bangalore while Indian Institute of Science, Bangalore is the best university in India.

The new ranking framework has been drafted to provide an Indian context to educational aspirations and needs. This will help institutions that conduct research in languages other than English and are focused on inclusive education, two factors that are overlooked by international agencies.

All 122 centrally-funded institutions — including all central universities, IITs and IIMs — participated in the first round of ranking. The framework is primarily divided into two categories: Category A covered institutions with academic autonomy and a greater focus on research and category B comprised colleges and centres affiliated to a university and more focused on teaching. An institution can volunteer to be ranked in both categories.

In Times Higher Education BRICS and Emerging Economies rankings for 2016, Indian educational institutes bagged 16 places among top 200 universities. Indian Institute of Science, Bangalore was ranked 16, the only Indian institute to feature in the top 20.