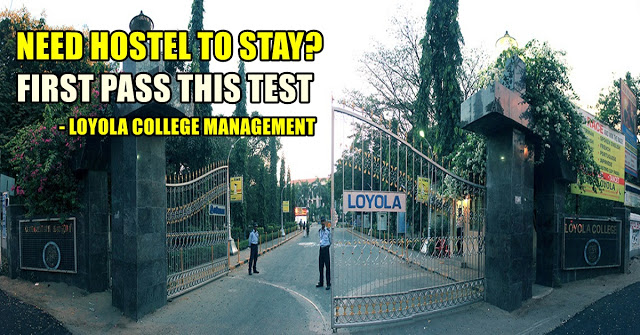 If You Need A Hostel To Stay Inside Loyola College Then You Have To Pass English Dictation Test!

Faced with a high demand of hostel rooms on the campus, Loyola College in Chennai has found a unique way of weeding out some inmates: giving tests for English vocabulary.
Residents of Loyola College hostel were puzzled on Thursday when they were asked to write an English test. They had to pass the test to continue staying in the hostel, they were told. Students told TOI that they were informed that they would need test to secure a passing mark of 20 out of 50 or be denied the chance to stay in the hostel.They were also told it was an exercise to enhance their vocabulary.“When we were given the test, we were told that there is a demand for hostel rooms and that we have to pass the test to be in the hostel. We were asked to prepare before the exam that included questions like ‘match the following’ and meanings of words,” said a final year student. Some of them found it strange that existing residents, but not fresh applicants, were asked to take the test.A faculty member of the college said that the number of students exceeded the hostel capacity by more than three times. The hostel has 700-800 rooms accommodating approximately 1,500 students.

Loyola College PRO professor Anthony Samy said the test is only for senior students and not for fresh entrants, and it is not the only criterion deciding their stay.

“It is a way of educating students and the hostel director thought it could be one of the methods to filter. It is a very easy test to pass. However, we will not be asking students to vacate based purely on the test. Other factors like indiscipline and having multiple arrears are considered first. The test is one other criteria to filter students,” he said.
The college said it will not administer the test to fresh entrants from other districts or cities as they would be unfamiliar with the city unlike the seniors who may be able to find accommodation outside the campus.

However, students pointed out that finding a good PG accommodation is a task in itself due to high rents or the matter of maintenance. Local residents in the city are not considered for hostel admissions in most colleges.
Source – TOI