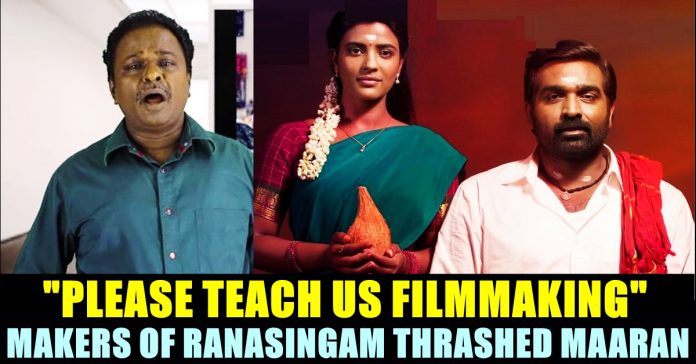 After receiving severe backlash for reviewing Christopher Nolan’s “Tenet” by watching it through Piracy, “Blue Satta” Maaran, now came up with a video reviewing the online released Ka. Pae Ranasingam movie. His review seemingly got the attention of the filmmakers who released pressed release condemning the movie reviewer.

Aishwarya Rajesh and Vijay Sethupathi’s “Kanavar Peyar Ranasingam” got a direct online release on pay per view portal Zee Plex. The film released on 2nd of October and is announced that it will be available for Rs. 199 per view for the audience. It got released in 150 countries across the world.

As soon the film got released, reviews poured in the Internet through all the directions. Popular Tamil reviewer Blue Satta Maaran also reviewed the film, criticizing the screenplay of the film.

The upcoming filmmaker who narrated the story of the film, said that the makers showed unwanted backstory of the protagonist’s love life instead of showing how he got killed. He further said that the film’s screenplay is contradictory as many government officials including the PM are helping the female lead. “The film’s screenplay doesn’t help the story of it.” he said in his review.

He further compared “Ka.Pae.Ranasingam with a Sinhalese film named as “Death on a full moon day”. Maaran also said that the makers have shot scenes only for the sake of the dates provided by Vijay Sethupathi. “The film runs for 3 long hours which is also a flaw.” he said in his review.

Check out his video below :

Responding to this review of Maaran, Director P. Virumandi and writer Shanmugam Muthuswamy, released a press note slamming the reviewer. They started their note by calling Maaran as “World’s most intelligent brother Blue Sattai Maaran” in a sarcastic tone.

“We got extremely sad on seeing a scientist like you who understood the story we chose, miserably failing to understand what we said through the scenes and screenplay.” his statement read.

“Only few people like you would explain a woman’s love for her husband. We feel sorry for trying to convey it through some scenes. Amidst those scenes, we showed why the protagonist did that job but we couldn’t understand how it didn’t go well with your hard head” his statement read.

“He said that I have written screenplay against my own story. I can understand that aged people couldn’t do a thing. ” they said. They also believed that Maaran was sleeping when the film streamed in Zee Flex.

“We will learn how to make films from Maaran and would grab a place in the list of world filmmakers.” the statement sarcastically said. The filmmakers also challenged Maaran for a public debate. “If you have time and guts, let us go for debate” the statement said.

Director P Virumandi and writer Shanmugam Muthuswamy has made this press release, going by the reports. Here’s the post of the writer of the film :

Comment your views of this review of Maaran and the reaction he receiving from it !!

Mukesh Ambani's Reliance Retail Ventures which is a subsidiary of Reliance Industries has bought Shri Kannan Departmental store for a whopping amount of Rs.152...